A pro-Bola Tinubu coalition, the Support Groups Management Council, has reacted to the disturbing video showing the National Leader of the All Progressives Congress (APC), Bola Tinubu, in a wet dress at the palace of Awujale of Ijebuland in Ijebu Ode, Ogun State. 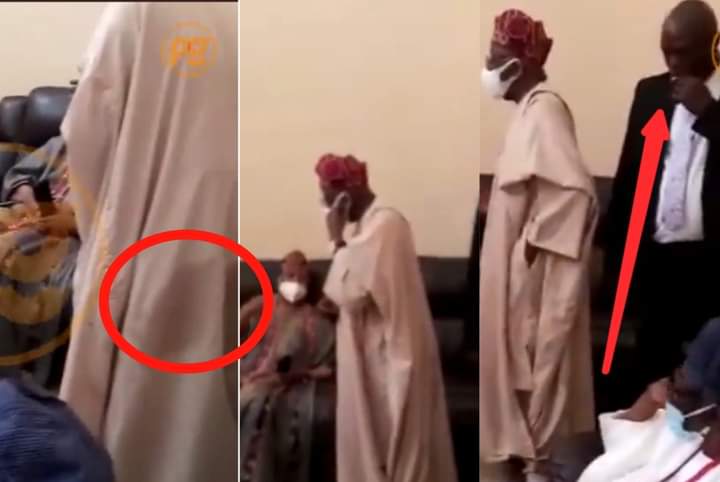 KanyiDaily had reported how Tinubu’s dress was soaked behind when he stood up to make his speech on Saturday at the palace of Awujale. While many have ascribed the wet part of the dress to sweat, others have said it is urine emanated due to his old age.

In the video, a man dressed in a suit believed to be one of Tinubu’s security detail was seen staring at the moist section of the dress while closing his nostrils, as another woman immediately wore her face mask as the APC leader rose up to speak.

The video of the supposed incident has gone viral on social media with many urging the presidential aspirant to focus on his health instead of pursuing his presidential ambition.

KanyiDaily recalls that last month, Tinubu had informed President Muhammadu Buhari of his ambition to contest for the presidency in the 2023 general election.

READ:  We Don’t Know Why ASUU Is On Strike - FG

In a statement on Sunday, Tinubu’s support group said the viral photo was manipulated, noting that the APC leader is strong and healthy to be Nigeria’s President in 2023.

The coalition also claimed that the viral photograph of Tinubu’s wet dress is the work of mischief-makers and evil people to discredit the awesome outing of the APC leader.

The statement was titled, “Evildoers, destroyers of destiny are at it again,” was signed by the group’s Director of Media and Publicity, Biodun Ajiboye.

It partly read, “The success Asiwaju Tinubu recorded at these high-level visitations to top traditional rulers had again led enemies of progress, the brewers of hate, discord and disharmony to script a dirty tale to discredit this awesome outing. This time it is that he wetted his dress!

“Assuming without conceding that is the case, so is it the back of his knees that would be wet and not the bum area? So if he wetted his babariga, he would not cover it and would still move to be flat to greet the Awujale of Ijebuland in the full glare of everyone present?

“It was the usual photoshop manipulations and shallow mental agility that pushed them to dispense a feeble narrative that made no iota of sense. Yet as their video showed, it was after their wetting incident that he went ahead and prostrated to Kabiyesi.

“This is another distraction, no amount of distractions or attempts to discredit Asiwaju will work to remove the wall from his political wind.

“Asiwaju Tinubu has declared his interest in the presidential race. He has his legs on the throttle. There is no going back.

“We appeal to Nigerian to ignore the evil-minded machinations and assure Nigerians that Asiwaju Bola Tinubu is healthy and strong enough to undertake the responsibilities involved in the expected rigours of campaigns and politicking when the time comes.”

KanyiDaily recalls that Tinubu had stayed in the United Kingdom for over three months in 2021 when he underwent surgery and therapy for knee injury.

He, however, returned to the country in October of the same year and traveled again in February 2022 to the UK where he calmed he went for “ten days consultations” with political juggernauts and stakeholders ahead of the 2023 general election.