A female student of Shehu Shagari College of Education in Sokoto has been beaten and burnt to death by her fellow students over alleged blasphemy.

KanyiDaily had earlier published a video showing the moment the student identified as Deborah was burnt to death by an angry mob on Thursday morning over remarks considered to be an insult to Prophet Mohammed.

According to Tribune Online, a source said trouble started when the late student, believed to be a Christian, was asked by her colleagues how she managed to pass her exams.

The source said, “She was having an argument with some of her schoolmates over their ongoing examination and when she was asked how she managed to pass her exams, she said it was Jesus.

“She was asked to withdraw the statement and apologise which she refused.

“The school security intervened, and took her to their post but they were overpowered by students after which she was killed in the process. After killing her, her body was burnt on the school premises.”

Meanwhile, authorities of the school have closed down the school and asked all the students to vacate the school premises immediately.

“Following today’s early morning Students rampage in the college, the college management has resolved to close down the college indefinitely with immediate effect. Consequently, all students are hereby directed to vacate the College campus immediately (12th may, 2022),” the statement read.

The video of the incident has triggered outrage on social media with many Nigerian calling for the arrest of all those involved in the brutal killing of the female college student.

A man has been caught on camera asserting involvement in today's lynching of a Christian student after she was accused of blasphemy in Sokoto.

Deborah was stoned and burnt to death today @ sokoto state college of education for blasphemy.

In a voice note, she reacted against posting of religious contents in their class group chat on WhatsApp. Rest In Peace Deborah pic.twitter.com/24sb9NzrTp

The most disappointing part of this is that this lady was burnt around the school environment. They didn't care about the outcomes of their action. The faces of these mobs show in the released video. Sultan of Sokoto should make sure the perpetrators face the wrath of the law. pic.twitter.com/Ho2W7KM8d0

Any mob action anywhere killing anyone for any reason is wrong, barbaric and un-Islamic. The sooner our ulama wakes up to educate people on sensitive issues like these the better.

The mob action against the lady in Sokoto is most unfortunate and completely condemned.

The gruesome killing of the female student, whose name I understand to be Deborah, in Sokoto on allegations of blaspheming prophet Mohammed SAW must be investigated and the culprits must be severely punished. @Elrufai insulted Christ, but Christians didn’t kill him!#TableShaker

Innalillahi wa inna ilayhi rajiun
What manner of barbarism just happened in Sokoto?
Who the hell are you to take someone's life?
The Prophet (SAW) went to visit a man that usually insult & pour debris on him when the man was ill
Nigeria keeps producing serial killers!
Oghenna!

Murderers of Christian Woman in Sokoto Must Be Arrested & Punished!
I just watched a bloodcurdling video clip of a bunch of murderous, maniacal brutes murdering & burning a Christian woman at the Shehu Shagari College of Education in Sokoto because she allegedly blasphemed Islam.

According to multiple reports, Deborah a female student of Shehu Shagari College of Education in Sokoto, accused of Blasphemy was killed and burnt. This is what happens when there are no consequences for actions in the society. The government must wake up from their slumber!!

This animal and his accomplice are currently walking freely in Sokoto after killing someone for disrespecting their God. The authorities need to arrest and prosecute them. This sort of nonsense needs to stop. pic.twitter.com/d21R67VAaC

A female student was kïlled by her own people in Shehu Shagari College of Education, Sokoto today.

According to them, she insulted the prophet. She was murdered in a school & the school authorities couldn’t intervene.

What kind of country is this?

All the boys whose faces appeared in that tragic trending video from Sokoto state will have elevated status in their society as a result, they will be tagged heroes and tipped for greatness. In a few years, they will occupy powerful seats. That’s the way it works in the North. 💔

Video of that female student murdered in Sokoto by a mob for "religious reasons" is proof that we have a long way to go in this country.

Her murderers made a video about it, knowing that nothing will happen to them. They'd even be praised in certain quarters.

A Christian student was burnt alive yesterday by a mob in Sokoto because according to them he "insulted" prophet Muhammed (peace be upon him). The truth is that this is jungle justice and it's unconstitutional. Nobody will be arrested for this crime because we live in a

They killed Deborah in cold blood, burnt her body and had the guts to make a video about it.

They are very confident they will go scot free. @AWTambuwal the Murderers hiding under Islam are in Sokoto. They must be fished out.

That girl was killed by those mobs in sokoto because she was against them posting religious stuff in a school group that was meant for academic purpose.

No trial, no prosecution.

This is the reality

And if you support the killing of that female student in Sokoto in the name of blasphemy, you're not different from Boko Haram

You all are killers and criminals

Some of the faces of the criminal fanatics and unexposed animals who stoned and burnt a Christian female student of Shehu Shagari College of Education in Sokoto today was visible. Governor Aminu Tambuwal must bring them to justice if he wants to be taken seriously by sane voters.

This is the face of the student that burnt his fellow student because of religious blasphemy in Sokoto State.

Angry student mob stoned a christian female student till she could no longer move and they burned her alive for allegedly criticizing prophet muhammad.

Let it be known that this happened in Sokoto State, Northern Nigeria on the 12th of May, 2022.

If you are one of those that lynch thieves just take this moment to know that you and those sokoto students who killed their fellow student are the same. Hope you use this as a mirror into your despicable acts.
No one has the right in anyway whatsoever to kill another.
No one! 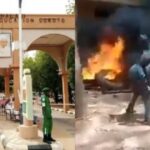 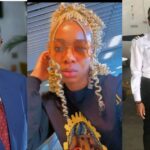