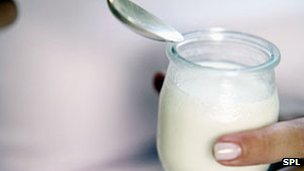 Pregnant women who eat low-fat yoghurt can increase the risk of their child
developing asthma and hay fever, a study says.

Pregnant women who ate low-fat yoghurt with fruit once a day were found to be
1.6 times more likely to have children who developed asthma by age seven,
compared with children of women who did not eat low-fat yoghurt.

The study also found that the children of these women were more likely to
have allergic rhinitis (hay fever) and current asthma symptoms.

But the results showed that milk intake during pregnancy was not linked to
any increased risk of asthma.

In fact, milk was shown to protect against asthma development.