Atanda, a driver and divorcee father of two, allegedly lured the girl
to an uncompleted building at a nearby well at Sango area and allegedly
had carnal knowledge of her.

The girl’s mother, Hadijat Saliu, told journalists in Ilorin on
Monday that she had sent her daughter to fetch water at a nearby well on
Thursday morning.

Saliu said when the girl did not return on time, she asked her elder sister to fetch her.

She said on getting there, the girl’s elder sister met Atanda making
love to the teenager and quickly rushed back home to inform her.

Saliu said she immediately left for the place and still met the man making love to the 14-year-old girl.

She said when she could no longer bear it, she tapped the man on the
shoulder, adding that the man quickly jumped up while naked.

Saliu added that a doctor had confirmed that her daughter was pregnant.

Our correspondent gathered that Atanda and the teenager had been
regularly having intercourse for a while. Saliu said, “It is true.  I
met him on top of my daughter and I tapped him to get up from her. We
have gone to a hospital and a doctor confirmed that my daughter is
pregnant.

“I sent my daughter to go and fetch water.  When she did not come
back on time, I sent her sister to fetch her.  Her sister came back to
inform me that an old man was making love to my daughter.  So, I went
there and saw things from myself.”

The victim also acknowledged that Atanda had made love to her.

But Atanda denied having any sexual relationship with the girl, alleging that he was being framed up.

He stated that he had gone to fetch dogonyaro leaves when the girl beckoned him to assist him lift her bucket of water.

Atanda said, “On that day, I was just passing by to collect cashew
and dogonyaro leaves to treat myself. The girl said I should help her
lift her bucket of water she fetched from the well. In the process, I
heard one woman shout, ‘Everyone come oo! Come oh! He is raping my
daughter.

“I did not have canal knowledge of her because I had an operation
near my private part and I cannot have sexual intercourse now.”

He added that girl’s mother reported the case to the police station.
He added that the matter would be transferred to the state’s Criminal
Investigation Department for further investigation.

Abdullahi said, “The woman had raise the alarm and the matter was subsequently reported here. It is an unfortunate incident.

“Right now we are preparing a signal case file transfer to the state
CID at the state headquarters.  The offence was reported at the station
last week Thursday. He had carnal knowledge of the girl at an
uncompleted building very close to the well.” 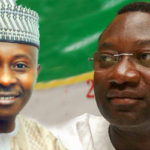