Search
Menu
Search
A middle-aged woman, Mrs. Chinwe Amoloku, on Sunday gave birth to a baby in a latrine at Umusan Ogbe, Kwale, Delta State. Amoloku, who it was learnt, had no inkling that she was due for delivery, had visited the convenience in the evening when she gave birth without the help of a birth attendant. In the process, the baby reportedly fell into the latrine. She was said to have raised the alarm which attracted neighbours who rescued the baby.

“We used a stick to push the baby into a rubber bucket tied with a rope in order to drag it out of the pit,” an eyewitness, Sunday Uzor, said.  It was learnt that the woman and her baby were later taken to a traditional birth attendant and a nurse.  Uzor said, “The woman said she was pressed and went to the toilet but when she pressed, the baby came out and fell into the latrine, while the placenta slipped into her stomach.” 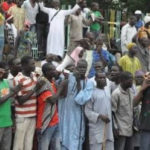