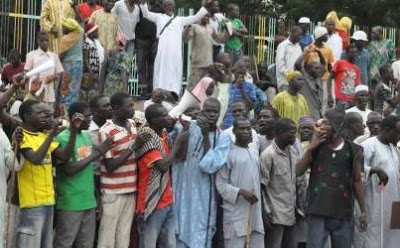 *We pay N45,000 at Zenith Bank to Lagos Govt for our release .
**50 of our members are being detained in Majidun Prison.
**Our belongings will be seized from us and maltreated by Mgt.
**Prison condition is harsh and uninhabitable.

Governor Babatunde Fashola in his new law outlined new regulations
restricting the movement and activities of beggars within the Lagos
metropolis, but this his rather harsh decisions obviously didn’t go down
well with the beggars.

The embittered handicapped didn’t hide
their opposition to the restrictions yesterday as they took to the
streets, walking in their hundreds to the governor’s office in Alausa,
protesting alleged maltreatment and extortion they receive at the hands
of law enforcement agents in the state.

In a statement a copy
of their protest the beggars under the auspices of Beggars Association
of Nigeria (BAN), accused law enforcement agents of incessant arrest,
maltreatment and extortion.

According to them: “We, the people
with disabilities in Lagos state adopt this medium to express our
displeasure and unhappiness towards the actions taken and the one to be
taken by the Lagos state government administration.

“First, our
movement within Lagos has been restricted such that anyone caught
roaming and begging for alms on the road will be taken to Majidun prison
in Ikorudu.

“At the prison, all our belongings will be seized
from us and we are also maltreated by the management. The condition of
the prison is so appalling and devastating that it causes more harm to
our health and among other things, there is no religious freedom,
privacy or conveniences as the case may be.”

The spokesman for
the beggars, Mallam Zakariya Hassan also accused the state of collecting
a large sum of money from them to aid their release from the prison.

“After that, they collect the teller from us and give us receipt which we take to Majidun Prison before one is released.

“I was just released from the prison after some people who love me
contributed the amount which they asked from me and paid to Alausa
people.

“Right now, more than 50 of our people are being
detained in Majidun Prison and that is why we have decided to cry out to
media houses, nongovernmental organizations, human rights activists and
individuals to come to our aide.”

The beggars also appealed to
the state government to make better provisions that will bring an end
to their present hardship by calling those agents that maltreat and
extort money from them to order.