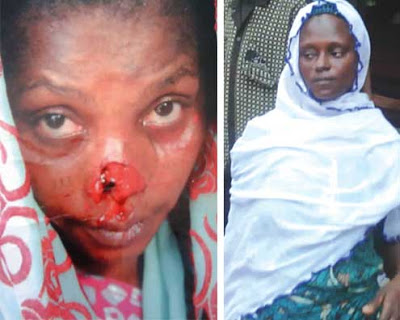 A
housewife, Mrs. Ruka Amoha who claimed her husband has denied her
sexual intercourse for some months decided to vent her anger on her
neighbour, Mrs. Yemi Adelani.
Ruka,
who alleged that her husband, Wasiu Amoha, starved her of sex because
he was enjoying an amorous affair with her neighbour, descended on Yemi
and bit off her nose, during an argument at their apartment.
“I
cannot accept a situation where Yemi is enjoying her husband and mine
at the same time thus denying me the opportunity to enjoy my husband,”
said Ruka, a mother of three. Click read more when to continue…

The incident happened at 13, Adealu Street, Dopemu, Lagos, southwest Nigeria.
Doctors at the Lagos General Hospital, Orile Agege confirmed that Yemi’s nose was  badly damaged  and she needs plastic surgery to survive.
The victim, a mother of four kids, confirmed that Ruka accused her of sleeping with her husband.
She
denied ever having any affair with Wasiu, Ruka’s husband, who rented a
room in the same building Ruka and her husband where reside.
Yemi
said that the difference between them is that she has been living
peacefully with her husband unlike Ruka who was always fighting her
husband and neighbours.
Wasiu,
the man at the centre of the storm confirmed to P.M.NEWS that he has
been having constant quarrel with his wife, Ruka because of her
behaviour.
When
P.M.NEWS asked him why he was not having sex with his wife, he said it
was because of her constant quarrel with him and he had no peace of mind
to even think about sex.
On the day of the incident last week, Ruka reportedly ambushed Yemi and grabbed her nose and bit it off.
She
bled profusely and was rushed to the hospital where she was treated.
But she is still expected to undergo plastic surgery on the nose.
The police from Oke Odo Police Division later arrested Ruka. After interrogation, she was  charged before an Ikeja Magistrate’s Court sitting at Abule Egba  for assault and inflicting injury on Yemi.
The offence, the police said, is contrary to Section 244 of the Criminal Code, Laws of Lagos State of Nigeria, 2011.
She pleaded not guilty.
The
presiding Magistrate, Mr. O.A. Komolafe granted her bail in the sum of
N50,000 with two sureties in like sum; one of them must be her  blood relation.
The matter was adjourned till 24 August, 2012 for mention.
She was remanded in prison custody at Kirikiri pending when she will fulfil  her bail condition. 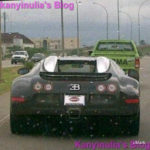