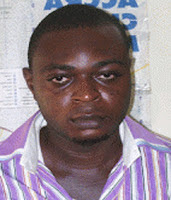 26 year old unemployed Nigerian, Nathaniel Udama Adu, is in the grips of
the Mile 7 Police in connection with the murder of a 19-year-old SHS
leaver, Matilda Asante, believed to be his girlfriend, at Tantra Hills
in Accra.

Detectives from the station were dispatched immediately after
information got to the station at about 7:45am on Monday, June 18, 2012
that a dead body had been found at Tantra Hills.

The Mile 7 Police District Commander, DSP Peter Yembila, told DAILY
GUIDE that when the police got to the scene, an uncompleted house, the
body of a young female of about 19 years was found lying in a supine
position covered with a bed sheet, while her legs and neck were tied. 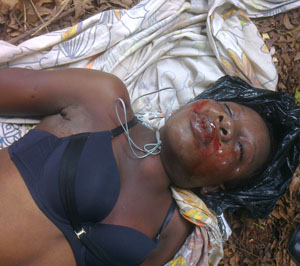 When
police tried to remove the cover, they detected that a black polythene
bag had been used to cover her head before tying it to her neck, which
was broken.

The police suspected that the victim might have been killed in a nearby
house and later dumped in the deserted uncompleted structure.

They therefore went into the adjoining house and met one Nigerian by
name Collins Uka, who said he rented the house and lived there with his
younger brother, who joined him from Nigeria in November 2011.
As police moved from one room to the other, they found a pillow-case which matched the bed sheet that covered the deceased.

Uka disclosed that it was his younger brother’s room, adding that the brother was at an internet café browsing.

The police personnel proceeded to the said café and arrested the
suspect who identified and confirmed his relationship with the deceased
but said the last time he saw her was in April.

Suspect Udama said he however communicated with the deceased on phone
and the last conversation they had was on June 11, 2012. Nathaniel had
since been kept in police custody while investigation into the matter
continues. 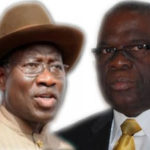