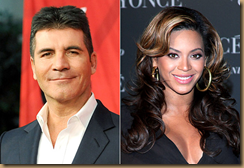 Simon Cowell wants Beyonce to be a full-time judge on The X-Factor — and he’s offering her an annual salary of $100 million to do it, according to reports online.
It would the highest TV salary ever, and, indeed, an ideal job for Beyonce, 30, who gave birth daughter Blue Ivy, her first child with husband Jay-Z, last month; the X-Factor stint could theoretically allow the Grammy winning singer a way to stay in the public eye during her baby’s first years without having to tour worldwide.
Fellow first-time mom Mariah Carey (she gave birth to twins Moroccan and Monroe last April) was originally X-Factor producer Cowell’s choice, but things have changed, a source told MediaTakeOut.com, which first reported the rumor.
He wants a big-name female star on the panel,” said. “Mariah [Carey] is good, but she’s not that hot today. He wants Beyoncé because that would immediately give him the bounce needed to beat ‘American Idol.'”