Her name is Peace but for Mrs. Mary Peace Agbaso, there is absolutely no peace in her mind right now. A tumultuous, devastating feeling has seized her soul and peace can only return when she finds her missing son, stolen by a woman, who had come to her shop, pretending to be a friend.

Wearing a forlorn face, with her entire being seemingly far away from her present surroundings, Mrs. Agbaso sat in a rickety seat, brooding and gazing at visitors that kept trooping to the family’s residence at No. 2, New Market Street, Owerri, Imo State.

The visitors were there to commiserate with her over the theft of her nine-month-old baby that had just been stolen by a woman, pretending to be a customer.

Fighting back tears and with sweat, cascading down her face, Mrs. Agbaso sighed perpetually, wondering why she should be a victim of such a monumental misfortune that has inflicted permanent trauma and sorrow on her family.

The baby, Chiemerie Emmanuel Destiny Agbaso, was said to have been stolen by a woman that hid her evil intentions by pretending to be a customer. By the time Mrs. Agbaso realised what was happening, her handsome little baby had disappeared, along with the customer.

On the fateful Thursday, April 5, Mrs. Agbaso had left the house for her place of business. The fair-complexioned woman from Amachara Amaino in Ikeduru Local Government Area of Imo State had no inkling whatsoever that fate had packaged a devastating parcel for her.

The situation, expectedly, has turned her and her husband, Mr. Callitus Agbaso, into objects of pity, as visitors, relatives and well wishers have continued to besiege the home of the embattled family to catch a glimpse of the couple and ascertain from them what actually befell them. Mrs. Agbaso, a hairdresser, has refused to be comforted since the mysterious disappearance of Emmanuel.

She narrated her ordeal to Daily Sun: “On April 5, 2012, one of my girlfriends, Mrs. Rose Nwachukwu, from Emii in Owerri North Local Government Area of Imo State came to my shop at 17, Odueze Street, Owerri. Before then, a lady was already in my shop to fix her nails. I had given my nine-month-old boy, Emmanuel, to my friend, Mrs. Nwachukwu, to enable me to go and bring my baby girl back from school.

“So, I left for their school. As I was coming back from the school, I saw my friend inside my shop but I did not see the other person whose nails I had fixed before I left to pick my daughter from school. When I came to my shop, my daughter kept asking about her younger brother. I forced her to change her school uniform but she insisted that she wanted to see her brother.

“I went to my neighbour’s shops to look for him because they used to carry him because my son is a handsome boy and a joyful child. They told me that my son was not there. I returned to my shop and asked my friend, Mrs. Nwachukwu, to tell me the whereabouts of my son. She told me that the lady she met in my shop, the one that had come to fix her nails, took my baby and had gone to buy pepper soup from the next shop.

“I raised the alarm that I didn’t know her. She shouted in surprise. I repeated that I didn’t know her. I asked my friend, ‘what did she tell you before you allowed her to carry my son?’ She said the lady was saying that my son is a fine boy and that she wanted to carry him and my friend now released my baby to the woman. And few minutes later, she told my friend that she wanted to buy pepper soup in the next shop and she carried the child and left.

“From that point, we started looking for my son, combing every nook and cranny. Some people told me that they saw her when she was carrying the boy but they didn’t know that she had an ulterior motive. My baby is a fine boy and nobody will see him and will not like to carry him. So, they did not confront her to know where she was going with the child.
“While the search was going on, I called my husband, Mr. Callistus Agbaso, a spare parts dealer, on phone on the development. He rushed to my shop immediately and thereafter, he went to Owerri Urban Police Station where he reported the matter. We went to the police station with Mrs. Nwachukwu on that particular day.
“The next day, a Friday, my friend, Mrs. Nwachukwu, came to our house very early in the morning and both of us, including my husband, went to the police station headquarters to also report the matter. After writing our statements, Mrs. Nwachukwu was detained in the police cell.
“Before then, on Wednesday April 4, the lady that stole my baby had come to my shop and told me that she wanted to buy weave on for her younger sister but later said she called her and the sister said that she had gone to her boyfriend’s house. The following day, she came to my shop to fix her nails but told me that her sister would come to my shop later in the day to fix her hair.”

Narrating how he got the news of his missing son, Emmanuel’s dad, Callistus, told our correspondent: “On the fateful Thursday, about 4.15pm, my wife called me on phone, that I should proceed to her shop immediately. She said she was looking for my son. When I arrived at her shop, I saw a crowd and I asked about my son and what happened to him. Then I rushed to Owerri Urban Police Station to report the matter.”

He’s appealing to everyone to join in the search for his son. According to him, his family would remain eternally traumatised until the boy is found. 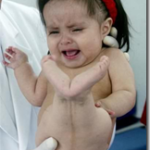