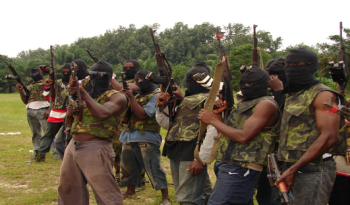 Following the attacks by Boko Haram against Government Agencies and Christians in the North, a Militant group from the Niger Delta region has asked the islamist sect to cease attack on Christians or be prepared for war.
The group christened Egbesu Mightier Fraternity of Izon Land in a press statement made available to Pointblanknews.com warn that the life and properties of Northerners living in the South will not be spared if Boko Haram continue bombing of churches and killing innocent Nigerians.
“NOTE WELL, if further killings by Boko Haram as a result of Goodluck Jonathan’s Presidency in the country within fourteen days of this statement, we shall without hesitation commence sending every Muslim in the Niger Delta Region to their various homes and ask our people to return home. No section of this country is an embodiment of killing others. Muslims can’t live in our land freely (Niger Delta) while they will be killing our people in their land. If they don’t want peace we will meet them were ever they are. This is our message.” They said.
The Group wondering why no muslim political leaders from the North has openly condemned the activities of Boko Haram warned that no northern leaders will be spared in the war against Boko Haram.
In the release jointly signed by GEN – OKIN SELE GEN – ELVIS TENTEN Bazoka Boys of Water-force of Izon land Niger Delta GEN – KURUMAH GEN – ABU MIC The Strike Force Barkoromo Ogbo of Izon land Niger Delta the Join Revolutionary Council of the Niger Delta Militant Group said the activities of Boko Haram was purely to destabilize the administration of President Goodluck Jonathan, a Southern Minority.
According to the statement “ We are compelled by the present Boko Haram merciless bombing in the country without verifiable developmental agitation. The continuous killings of Christians in the north should be stop forthwith. Those foolish and irresponsible enough to assume or pretend that it is possible to run Nigeria by sectarian dictation do no more than reject a natural phenomenon, which is that when it hits, it reverberates.”
“The tsunami of Boko Haram will not, in its sweep, skip the homes and interests of it promoters, active or passive. Boko Haram has been leaving bombs around churches and other places with clusters of the innocent. In the event of a failed state, all those Nigerians pretending to possess two heads, and currently cruising around in limousines and jetting about the globe will be grounded.
“Why can’t we live in peace? If peace is pronounced a war, why can’t we go our separate ways by amicable agreement? Boko Haram may have its origins from wherever it likes. Its wild excesses are essentially a reaction to the Presidential ascendancy of Dr. Goodluck Jonathan. It has its sponsors and financiers. If we are actually one Nigeria, why won’t we allow other Geo-political Zone to rule the country?
“Saudi Arabia is the centre of the Islamic faith, yet, there was not even a single killing of Christian faithful in that country. W hy all these killings of National Youth Service Corps members and other innocent citizens in reaction to Goodluck Jonathan’s Presidential Victory?
“No Muslim has condemned the killings of Christians by Boko Haram in the North. Is it only the administration of President Goodluck Jonathan Nigeria has witnessed major security lapses as the northern elites want to ridicule him as incapable of protecting the territorial integrity of the country? W e have tasted blood war. That Borno and the entire North are guilty of harbouring and protecting Boko Haram. If they don’t want the terrorist organization they should push them out of their midst and give them up to the military after all they live amongst them and probably pray in the same mosque. So they can’t claim that they don’t know where the Boko Haram are.”
“The emergence of the notorious Boko Haram was premediated and designed to blackmail and undermines the authority of President Jonathan. The Sect is suspected to be affiliated with the Yemini version of Al Qaeda.”
“We urge the President to invoke his powers as Commander-in-Chief of the Armed Forces and give his security chiefs an ultimatum within which to use every strategy to dislodge the notorious Boko Haram and other perpetrators of attack on the Nigerian people. The Truth is that no dispensation will ever be good in Nigeria except from Muslim North. The release of Boko Haram Co-founder, Alhaji Ali Tishau by the Police on request by the Defence Intelligence Agency (DIA) and later vanished from detention is clear demonstration that the North is out to fight the President with the Islamic Sect. Enough is enough with this Sect to worry Mr. President.”
“That if further attempt to distract the developmental attention of Mr. President in the country, we the Egbesu Mightier Fraternity will earth the so called Boko Haram in the North. This is our word. We have killed and we will not care to kill again.”
Source: POINTBLANKNEWS.COM