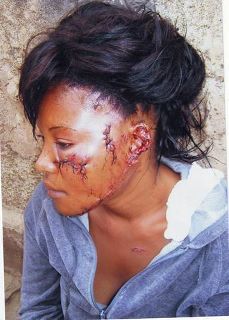 I dont know what must have warranted this…..but whatever her crime is, i dont think it mush have led to this….What sort of man will destroy his woman face like this and even cut off one of her ears which is now destroyed forever…..but na wa oooo this woman mumu na im worse pass…what sort of stupid love is that…can u imagine what she said   “I don’t want him to go to jail; I love him. All I want is for him to assist me financially to acquire good medical attention,” she says…….i guess this lady is one of the millions of women who are battered daily and cant do nothing cos they are slaves of love…. pls read the full story when you continue

STICHES cover her once beautiful face, while pus seeps from her severely cut ear. Her beauty has been tattered, and she may never look the same again.

Despite all the pain she’s going through, 28-year-old Mercy Ng’uni is a woman in love, ready to forgive the man that almost killed her.

Mercy, a Kanyama resident and a mother of three, narrates how her boyfriend severed her ear and sliced face with a bottle.

“Nothing really happened for him to beat me up like this. He is my boyfriend and sometimes he spends nights at my place,” says Mercy.

Mercy, a hairdresser by profession, narrated that on the fateful day, she knocked off later than her boyfriend name withheld, an issue she suspects may have triggered him to beat her.

“On that day he came home at 18:00 hours and I came 30 minutes later. All was okay, we talked just as usual and he told me he was going to watch a soccer match at a nearby bar. 20 minutes later he came back. I wondered why he was back so early but he told me he couldn’t watch the game,” she says.

“He later told me to prepare his clothes for the following morning and told me he wanted to sleep,” narrated Mercy. “He asked if we had locked the door so that we could go to bed. He later asked for water, and I gave him water as he requested.”

Mercy said the man kept tossing in bed and woke up around 23:00 hours, wanting to go outside as he claimed he was not feeling too well in the house.

“I refused to open the door because it was late. Instead, I opened the window and we started chatting. As we were chatting, we both fell asleep,” says Mercy.

Mercy says around midnight, she felt someone hitting her with a bottle and she woke up thinking they had been attacked.

“I just felt someone hitting me with a bottle and I immediately woke up and screamed that we had been attacked. At this point the bottle had broken and he told me that no one had attacked us and that he was going to kill me,” she says.

Mercy narrates that her boyfriend started cutting her face with the bottle and cut her ear.

“He started cutting my face while telling me that he was going to kill me, I screamed for help but the bedroom door was looked. I managed to grab his hand and that’s how he dropped the bottle.

My daughter then rushed to open the outer door and our landlord broke the bedroom door to rescue me,” she says.
Mercy says the landlord took them to the police station where the man was detained and she was taken to the clinic.

“I went to Kanyama clinic but I was told there were no doctors to attend to me and I was referred to the UTH,” she says.

Mercy says after she was attended to at University Teaching Hospital, she returned home only to find her ear on the bed.

“I found my ear on the bed and I put it in the fridge so that I could have it stitched the following day,” she says.

Mercy says the following day she called a medical personnel from a private clinic, who followed her home to stitch the ear, but it could not hold.

She says this is the second time her boyfriend has beaten her in the two years that they have been together.

“The first time he beat me up, he bit me on the cheeks. My phone rang at night and as I was about to answer, the line cut and he got suspicious and started biting me on both cheeks. That was the first time ever he behaved violently,” she says.

Mercy says her boyfriend was released from police cell three days after the latest the incident and has been begging for forgiveness.

Despite all she has gone through, Mercy says she is more than willing to forgive him.

“I don’t want him to go to jail; I love him. All I want is for him to assist me financially to acquire good medical attention,” she says.

However, Mercy’s brother Emmanuel just wants her boyfriend to face the law.

“I just want him to face the law. If my sister wants him back, that’s her problem. She should not come running to us next time,” says Emmanuel.