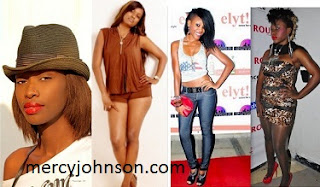 In what could pass as a shocking revelation, a Ugandan news media published a story in which they exposed women they said are prostituting themselves to foreign stars. The story, which was titled “Gals Who Stick to International Celebs like Glue” mentioned top Nigerian celebrities (some of them happily married or in relationships) alongside foreign stars as beneficiaries of the shamed women’s favour.
On top Nigerian footballer and happily married Kanu Nwankwo, the news media said:
“City socialite and glamour gal Judith Heard might have traveled to various cities around the world but that hasn’t stopped her from behaving like a commoner. She was literally in Nigerian football ace Nwankwo Kanu‘s pants when he was in Uganda to open a branch of his Kanu Heart Foundation.”


Top Nigerian music duo P-Square were said to have shared one lady called Tracy Bora when they breezed into the country for some functions. With all the beautiful women in Uganda why share one…hmm?
However, the most shocking revelation was that of former AGN president and a highly respected father Zack Orji. The news media reported that Orji had a swell time with one Sheila Nvanungi, a onetime radio presenter cum actress. The report went on to say that Nvanungi was practically pasted forever in Orji‘s sight every minute and made sure no other gal got close.
But it was later discovered that Nvanungi was also keeping the lead actor in the movie Forest Whitaker busy too, ouch! So while she was making sure that no other woman sneaked into Zack Orji’s bed, she was busy servicing both men –and both men were on the same movie set, wow!
Then came the flavor’s tale, broke the news of Flavor’s arrival in Uganda, but little do we know about what transpired behind closed doors.
The report said that two women Bad lack and her new found friend Sylvia Owori were the center of attraction at Club Rouge last Thursday during the Swagger Night in company of Mr. Flavor. They were all over him like paint on the wall.

Bad Black is said to have paid Mr. Flavor US$ 10,000 for a one night stand. All this time Sylvia’s  tomboy Malik was nowhere to be seen as Flavor had taken the front seat