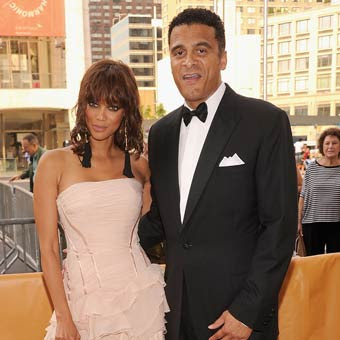 Compared to most other celebrities, supermodel and businesswoman Tyra Banks has always kept her private life private. But she recently welcomed the world into her bedroom (so to speak) when her Wall Street boyfriend, John Utendahl, escorted Tyra down the red carpet at Metropolitan Opera House’s opening night gala in NYC.

Utendahl is the man behind New York’s successful investment banking organization Utendahl Group. The two met and reportedly started dating when Tyra recently shifted the production of her shows, America’s Next Top Model and The Tyra Banks Show, from Los Angeles to New York. The couple has been spotted vacationing in Hawaii and Mexico together.

Even though Tyra has stated in the past, “I want to get married and have kids but the more successful I get, the less interested guys are,” she has clearly found a man who isn’t intimidated by her success. Total keeper!

Hottie Of The Day.