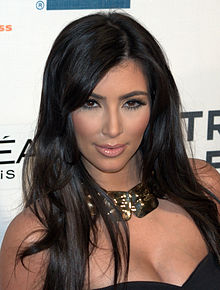 Reality star Kim Kardashian is alot of things to so many people. It is no surprise that she was honoured recently. She was named  the “Most Ill-Mannered Person of 2011.” by the  National League of Junior Cotillions.
The reality star was recognised “for making a private matter public and disrespecting the institution of marriage.”
According to Elizabeth Anne Winters, NLJC National Director,’The annual selections are based on the demonstration of dignity, honour and respect.’

Kate middleton was named the Best-Mannered Person of 2011 ‘for the poise and dignity with which she conducts herself in the public spotlight.’ She was chosen for the exemplary manner in which she conducted herself, before and after her marriage to Prince William,’ says the director.

Justin Bieber, 17, was feted with the accolade ‘for consistently showing courtesy to his fans.’
Paula Abdul rounded out the top trio, lauded for her “encouragement to aspiring entertainers” while Taylor Swift, 21, earned the top honour ‘for inspiring young people with her music and her manners.’