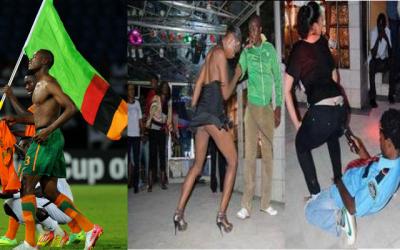 Prostitutes in Lusaka’s Kanyama, John Laing, Chawama and Kalingalinga compounds offered themselves free of charge to every man as part of their celebration after Zambia beat Ghana 1-0 at the Nations Cup on Wednesday.
A check by The Independent Post at nightclubs such as Kanyama’s Kanchembele and Chine Chikayeba found long queues of men waiting to have sex with a limited number of prostitutes.
A single prostitute served nearly 11 men and there were more than 200 men wanting to celebrate Zambia’s first qualification to the Africa Cup final since 1994 in style.

The situation was the same at John Laing’s Corogo night Club which is situated just opposite John Laing Basic School. But at Corogo, a man in his mid twenties was beaten up after he took long to attain orgasm when his turn to have sex with the prostitute came.

“Yes, we beat him up because he took too long to ejaculate. We were too many of us on line and the guy kept on wasting time on top of the prostitute,” said an eye-witness, identified only as James.
And in Chawama as well as Kalingalinga, TIP correspondents said only a handful of prostitutes were made to serve tens of Chipolopolo fans.

But another soccer fan, who claimed not have taken part in the ‘mass servicing’ of prostitutes, said the development was unfortunate. Mike Tembo suspected that many young people might have contracted the HIV virus and other STIs during the ‘sexual celebration. ’

“I think when Zambia plays the final, free condoms need to be provided so that we can protect our young men. Many of them had sex with the prostitutes without condoms,” Tembo said.