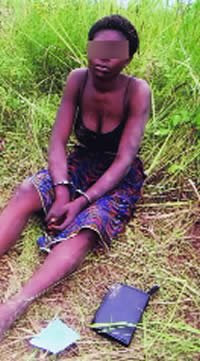 This could pass for one of the wonders of the world. It is a strange but true life story of a 22-year lady, Chinyere Alegu, who dragged her cousin’s daughter, Chioma Edukwu, 5, to a nearby bush, inserted her fingers in her mouth and pulled out her tongue . The victim died as a result of the wicked act.

The incident took place at Ndi Duma Ekpaomaka village, in Ikwo Local Government Area of Ebonyi State. According to a source, the suspect allegedly committed the crime under the influence of some unseen forces.
He narrated how the suspect behaved strangely, each time the spirit came upon her. But despite that, Chinyere was said to have taken her Christian life seriously and even became a ‘prayer warrior.’
Crimewatch was also told that the suspect, who was described by many as a very quiet person, usually saw vision and received revelations ‘anytime she was in spirit’.

One day, she told her relatives how she dreamt and the spirit directed her to pull out an object from an elderly woman’s mouth. However, when she woke up from sleep, she traveled to her cousin’s village, Ishiekke Igbubuikwo and told him she wanted to train his daughter, Chioma. Monday Edukwu was said to have granted her request and asked Chioma to go with her.

Chinyere was said to have taken the little girl to her elder sister’s house at Ekpaomaka where they slept in the same room.

At about 1.30a.m., Chinyere claimed she was directed to go and pray for an elderly woman and to pull out an object from her mouth but she decided to go along with the victim.

But instead of going to the woman’s house as she claimed, she dragged the little girl to a bush, which was a kilometre away from her sister’s house, allegedly pushed her to the ground and started praying for her.

As the prayer was going on, she allegedly inserted her fingers in the girl’s mouth and pulled out her tongue. And when the suspect came back to her senses, she realised that it was Chioma, and not the elderly woman from whose mouth she removed the object’ .

Realising the implication of what she did, she raised the alarm and beckoned on a hunter, that was passing by for assistance. Crimewatch gathered that the girl died before help could come her way.
The news of the incident spread like wildfire and attracted the villagers to the scene. They reported the matter at Ikwo Police Station while policemen went to the bush where they arrested Chinyere and recovered a copy of Holy Bible.

The suspect, who spoke to Crimewatch, said: “ I am a hair dresser by profession. I love to evangelise and attend churches and where they hold rallies and preach the gospel of Jesus Christ.
I was sleeping when the Holy Spirit instructed me to go and pull out an object from an elderly woman’s mouth. I dreamt again before I took Chioma to the bush for prayer and while there, I used my hands to remove her tongue.

“Having realised what I did, I raised the alarm and appealed to people to come and help me revive her. I used my right hand to remove her tongue. Sometimes, Holy Spirit visit me. I can pray in the house for three to four hours. I don’t know what to say but to beg my cousin to forgive me,” she lamented.

The deceased’s father told the reporter that he was surprised that Chinyere killed his daughter. “She came to me to request that my daughter stayed with her. Two days later, information got to us that Chioma, my first daughter, was found dead in the bush. I saw my daughter’s tongue on the ground and was later told that Chinyere removed it. I want law to take its course, I want justice to be done. I don’t know what came over her. I know her to be a Christian, a prayer warrior,” the grieving father said.

The Ebonyi State Commissioner of Police, Mr. Adeola Adeniji, said the suspect had been arrested and would be tried for murder. He said: “We didn’t see any object on her apart from the Bible.”

Culled from The Sun Online 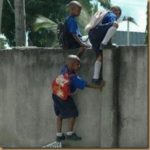