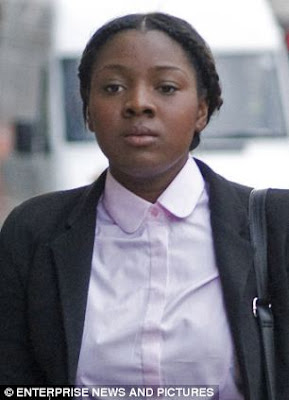 Victoria Osoteku a Nigerian-British teenage girl who plotted the killing of a schoolboy on Facebook before kicking him in the head as he bled to death. She was 18 when she armed a 20-strong mob who ‘hunted down’ and hacked to death the 15-year-old boy at a railway and Underground station in front of horrified rush-hour commuters.
Other teens convicted of Sofyen’s murder: Adonis Akra, 18, Samuel Roberts, 19, Femi Oderinwale, 18, Obi Nwokeh, 19, Christopher Omoregrie, 18, Samson Odegbune, 18. 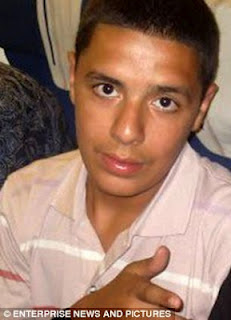 Sofyen Belamouadden was punched, kicked and stabbed to death in a ‘brutal and merciless murder’ planned on Facebook after a feud between pupils from two rival schools erupted into violence.
Victoria Osoteku was seen on CCTV kicking Sofyen Belamouadden in the head as he lay dying on the ground.
A-level pupil Osoteku, who loved ‘beef’ – slang for a fight – had rushed out of school during the lunch hour that day to buy a set of knives for £3.99 from Argos which were later used to stab the defenceless boy at least nine times.

The victim was chased into the station and surrounded in the ticket hall by the gang screaming: ‘We are going to fuck you up.’
He collapsed after being stabbed nine times in the lungs and chest in a ten-second attack in front of hundreds of passengers on March 25, 2010.

As he lay on the ground, Osoteku was captured on CCTV moving in to launch a final kick to the head before running off, leaving him to bleed to death.
Sofyen, a pupil at Henry Compton School in Fulham, West London, was taken to hospital but doctors were unable to save him.

Yesterday Osoteku, now 19, wept as she was convicted of manslaughter and conspiracy to cause grievous bodily harm after a five-month trial at the Old Bailey.
But the jury was unable to reach a verdict on a charge of murder after a week of deliberation.
It can now be revealed that Osoteku, who was studying drama and sociology at A-level, loved fighting and violence.

Besides listing ‘beef’ among her interests, on a social networking site she posted pictures of herself in her school uniform with the words ‘Missy Maffia’ and ‘Bang Bang’ written underneath.
Born to Nigerian parents in Peckham, South-East London, Osoteku’s upbringing was deeply troubled.

At the age of two, her father Abiodun took her and her three-year-old sister away from their drug addict mother Ebunoluwn, who has serious mental health issues and has been sectioned a number of times.

For a number of years, she was shunted between her aunt and a hostel before her father, a painter and decorator, remarried when she was five.
Osoteku told the jury that she suffered daily beatings at the hands of her stepmother.
At the age of eight she was taken into care and placed with foster parents.

Classmates described her as a bully who was always egging others on.

But the schoolgirl claimed to be a kind person. On her internet profile, she wrote in poorly spelt English: ‘Im a black inderpendent women who cares for all my bedrins and all fam. but every 1 is ke fam to me. Im a joka thats loves a joka .and im rely kind and fast to kick wid.’

During her trial, Osoteku attempted to pin the blame on others, sobbing as she claimed she had tried to stop them.

She said she was frozen in shock as the attack unfolded and ‘nudged’ the victim with her foot ‘to see if he was OK’.

But Mark Heywood, QC, prosecuting, said she was ‘at the heart’ of planning on Facebook and through BlackBerry and text messages for the attack.

The killing was provoked by ‘simmering tensions’ between pupils at a sixth-form college in Ladbroke Grove, West London, and teenagers from the victim’s school over the Underground station, which was regarded by both as ‘home territory’.

The day after the murder Osoteku went on a school trip to the Victoria and Albert Museum where she boasted about her role in the killing.
It was said she was ‘gloating she was with the boys, she kicked him, they used a samurai sword and cut his neck and back’. 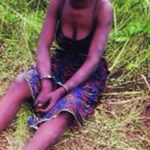