A student of Business Administration, Kwara State University, Malete, Mr. Rilwan Adeleye, escaped death by a whisker after four days in suspected ritual killers’captivity. Narrating his miraculous escape to our correspondent in Ilorin, Adeleye said on March 29, he boarded a taxi cab at Challenge Junction, Ilorin, Kwara State, en route to Taiwo Road, Ilorin…He said, “I wanted to go and withdraw some money my father had sent to me.
I stopped a taxi cab, which had two other passengers, and told the driver that I wanted to go to somewhere around Taiwo.

“On our way, the driver took a wrong route. So, I challenged the man and asked him why he wanted to pass through that way. The man said he wanted to avoid the traffic hold-up. That was all I could remember.”
Adeleye said he later became unconscious, only to find himself in an uncompleted building.

He added that his captors took him to a room in the building and drew his blood with a syringe.
He said, “Later, when I started recovering, I could faintly remember that they took me to an uncompleted building. Then I found myself in a room. I was the only person inside.

“I noticed that someone came in and drew blood from my body with a syringe.”
According to him, some of his captors came later and beat him mercilessly to the extent that he sustained a fracture in his arm.

21-year-old Adeleye said it was apparent by the anger of the ritual killers that his blood was not accepted for ritual purpose.
After much beating, he said his captors took him to a roadside and dumped him there but his friends saw him and took him home.

He stated that the whole incident lasted for four days; from March 29 to April 1.
He advised people to avoid “get rich quick” mentality and stop killing and maiming innocent people for rituals.

Adeleye’s uncle, Mr. Aranse Oluwa, corroborated the survivor’s narration.
He stated that the family members were rattled when they did not see Adeleye, who had told them he was going to withdraw some money from bank.

Oluwa said it was a relief to the family when Adeleye spoke with a family member on the phone after his release.
He said they had been frantically searching for him when he did not get back home on time.
Oluwa said, “He told us three people abducted him; two in front seat of the taxi and one other person, who sat with the victim at the back seat.

“His friends saw him along the road unconscious. They had to buy cold water and poured it on him to revive him before they later took him to a hospital. 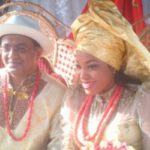