Islamist militant sect Boko Haram has revealed that a purported telephone call made to the African Independent Television (AIT) by a caller pretending to be a Boko Haram spokesperson was fake.

A source close to the sect told Saharareporters that the no one in the sect or any on its leadership initiated a call threatening to attack Lagos and Abuja in 72 hours.


A Nigerian local TV station-African Independent Television- had played a phone call in which an individual claiming to be a representative of Boko Haram threatened to attack Lagos and Abuja in 72 hours.

The caller also requested that Nigeria President Goodluck Jonathan unconditionally meet with the sect in Yobe state, without security, to discuss the terms of a ceasefire, but our most reliable source said the call was a prank pulled by individuals capitalizing on the hysteria created by Boko Haram’s recent attacks in northern Nigeria. 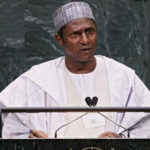