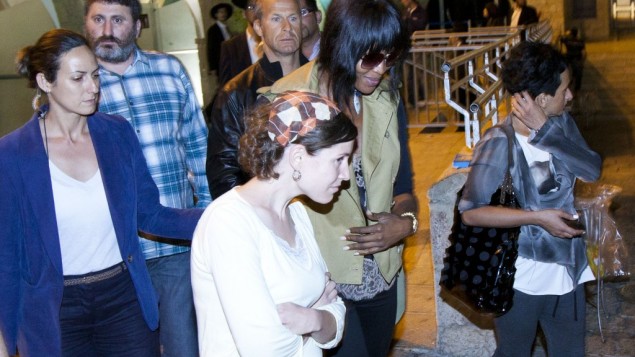 Supermodel Naomi Campbell celebrated her 42nd birthday on Tuesday with a trip to the birthplace of Jesus . Campbell, wearing a white shirt and black sunglasses, was flanked by Palestinian guards and her own private security detail as she toured the biblical town of Bethlehem. She lit candles in the Church of the Nativity in Bethlehem which was built on the spot where Christians believe Jesus was born.

Israel has built a high concrete wall around most of the town to keep Palestinian militants, including suicide bombers, out of nearby Jerusalem. “As much traveling as I’ve done, I’ve never come here,” Campbell told a Palestinian television station. “I’m happy to be here. Weapons and war, greed and oil I hope it all stops. I care about health, about good vibrations, not destruction,“

Later, Campbell celebrated her birthday at the nearby Casa Nova Palace Restaurant with her entourage.