A recent development in Delta State has sorely displeased the members
of its House of Assembly. It involves the resurfacing in Delta State of
Mr Dickson Adeyemi, a Chief Superintendent of Police (CSP), after he
was arrested and taken away for his alleged involvement in kidnapping
and other related criminal activities.

The legislators, at a house sitting on Tuesday demanded the re-arrest
and prosecution of Adeyemi. The motion for Adeyemi’s re-arrest, which
was moved by the House Deputy Majority Leader, Hon Johnson Erijo, was
unanimously adopted. The lawmakers said Adeyemi’s continued presence in
the state was not only an embarrassment but also a security threat that
would scare away foreign investors and urged the relevant authorities to
ensure that the allegations against him were thoroughly investigated.

Before his arrest, Adeyemi was the officer-in-charge of the Delta
Police Anti-Kidnapping Unit;  promoted to crack down on kidnapping
activities in the state.

However,kidnappings suddenly increased soon
after he took his position. Suspicious of his dealings, a crack team
from the Force Criminal Investigations Department (FCID) had in April
whisked Adeyemi to Abuja for questioning.

The State Governor, Emmanuel Uduaghan was fully in support of his
arrest. He said at the time that “the head of the Anti-Kidnapping Squad
in the state has been arrested with his boys and taken to the CID
Headquarters for alleged involvement in kidnapping and criminal related
activities. They are greedy people who are common criminals.”

However, Adeyemi was freed and—the lawmakers insist—he has returned
to the state, a situation they find unacceptable. Adeyemi was reportedly
freed as a result of the influence of his father-in-law, who is a
chieftain of the Police Service Commission (PSC).

The lawmakers urged President Goodluck Jonathan to order the
Inspector General of Police, Mohammed Abubakar, to properly look into
the alleged involvement of top police officers in criminal activities in
Delta State.

The state Police Public Relations Officer, Mr. Charles Muka, has however said that he was not aware of Adeyemi’s return. 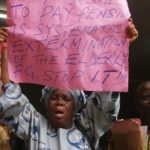