State Security Service on Wednesday in Abuja paraded six suspects for alleged involvement in the murder of Mr. Olaitan Oyerinde, who was the Principal Private Secretary to Edo State Governor Adams Oshiomhole.
The suspects – Mohammed Abdullahi, Raymond Origbo, Chikezie Edeh, Saidu Yakubu, Sani Abubakar and Hassan Bashiru – were arrested in addition to those held by the police.
Deputy Director, Media and Public Relations, SSS, Ms. Marilyn Ogar, who briefed newsmen, alleged that Oyerinde was murdered by Abdullahi, Origbo and Edeh.
The other suspects, Yakubu, Abubakar and Bashiru, were alleged to be buyers of stolen goods, who regularly buy stolen articles from the robbery gang.
They were reported to have bought items stolen from Oyerinde’s residence including four BlackBerry phones, one Ipad (sold for N10,000), one laptop, and  wedding ring. The gang allegedly took   unspecified sum of money belonging to Adeyinka Oletubo, brother-in-law to the late Oyerinde…..This our Nigeria, SSS said it was robbery, meanwhile Police arrested a Pastor and he is currently in prison…Read about it HERE…Meanwhile Continue.
Abubakar, 35, said he bought three BlackBerry phones and one Nokia C5 phone from Origbo for N52,000 and resoled at N57,000.
Ogar stated that investigations revealed that the careless statements by Oyerinde’s security guard, Ali Ihade, at various times about his master’s position in government attracted the attention of the prime suspect, Abdullahi, who hatched the robbery operation.
Ogar said, “On the day of the robbery, Abdullahi specifically instructed other gang members to tie up Ihiade before they entered Oyerinde’s residence so that Ihiade would not see his face.
“According to the robbery gang, Oyerinde was shot and killed by the prime suspect, Abdullahi, when he  (the deceased) ran into his bedroom and attempted to go underneath his bed.Abdullahi said he believed Oyerinde was reaching out for a gun under the bed and therefore shot him.”
She stated that the murder weapons comprising three guns used during the robbery had been recovered.
The suspects, she added, would be handed over to the police for prosecution.
The suspects denied knowing Rev. David Ugulor, who was arrested by the police in connection with the crime.
Origbo said Edeh took them to the house, adding that their plan was to rob Oyerinde, insisting that Abdullahi shot the former labour activist thrice.
Meanwhile, members of civil society organisations in Edo State, on Wednesday staged a peaceful protest along major streets of Benin against the continued detention of Ugolor.
The protesters also marched to the Anthony Enahoro State Assembly Complex and Dennis Osadebey Government House, in the Government Reservation Area.
Ugolor, Executive Director of African Network for Environmental and Economic Justice, was arrested last week Friday in Benin after a suspect arrested by the police named one ‘David’ as the sponsor of Olaitan’s assassination.
The protesting groups expressed sadness over what they described as the inhuman condition Ugolor has been subjected to since his arrest. 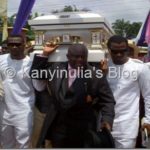