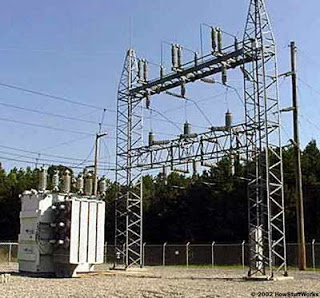 The Apata area of Ibadan was yesterday thrown into mourning as Power
Holding Company of Nigeria, PHCN, electric cable which fell from an
electric pole electrocuted six people. The seventh victim, however, survived and she is receiving treatment at a hospital.

Among
the electrocuted was a pregnant woman and her mother. Their corpses,
according to sources, have been deposited at a morgue within the city. Mrs.
Afusatu Abiade, the only survivor of the incident which happened at the
Agbekoya Market, was seriously injured. She had burns from shoulders to
her legs.

She lives at Omi-Adio area of Ibadan. She told P.M.NEWS
that “I came to the market around 5.30 a.m. to sell vegetables. I had
started selling when I heard a loud sound and the electric wire sparked,
caught fire and cut off from the pole.

“While trying to escape, the wire hit me and threw me down. That was all I knew till I found myself at the hospital.”

The
woman, who was placed on admission at the Garden of Eden Hospital
situated at the Aba-Alamu area of Apata, thanked God that she survived
the incident. According to her, she saw the corpses of those affected
being carried away.

One of her sons, Matthew Adewale, said though
they were born Muslims, they had converted to Christianity, saying this
may have been his mother’s saving grace.

The doctor on duty, Dr.
Fidelis Okorion, said though he was not around when the incident
happened, he was told that all the victims were brought to the hospital
but that the doctors tried their best but could only save one of them.

He said two of the victims of the incident were dead on arrival while the other four died at the hospital.

The people of the area told P.M.NEWS that they had made several complaints to PHCN about the congestion of the poles, stressing that the incident was not the first.

UPDATE:
Governor Abiola Ajimobi of Oyo State  today ordered the immediate
demolition of all the structures under the high tension cable on the
Apata-Bembow Road in Ibadan where no fewer than six persons were
electrocuted on yesterday morning.

The governor, who gave the order
on when he paid a sympathy visit to the affected market in
Apata, Ibadan, said that trading under high tension cable constituted
great danger to the lives of both traders and buyers in the market.