One person has been confirmed dead (15 Missing) after the Atlantic Ocean charged into Kuramo Beach in Lagos. The National Emergency Management Agency (NEMA) confirmed the death, saying 15 others are still missing after the incident.﻿

According to Mr. Femi Oke-Osayintolu, general manager of the Lagos State Emergency Management Agency (LASEMA), the tragedy, which mostly affected occupants of illegal shacks at the beach front, occurred at about 2am when residents were asleep. “Yes, there was an ocean surge at Kuramo Beach very early this morning and we have some  casualties,” he told the News Agency of Nigeria (NAN).“We have just recovered one body and we are still on a frantic search for about 15 people [who are] still missing. We have cordoned off the entire area and have asked residents to vacate immediately. It is a serious thing, but we are on top of the situation.”Osanyintolu recalled that ocean surge had, for long, been a source of avoidable deaths in communities around beach fronts, as it had wreaked havoc in the past. He warned people living or transacting business around other beach fronts in the state to leave as soon as possible. 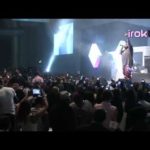