TWENTY teachers in three schools, who were absent from their duty posts, when Edo State Governor, Mr. Adams Oshiomhole, paid unscheduled visit to the schools in the state, yesterday have been dismissed.
Oshiomhole, who disclosed this during the visit to Asoro Primary School, Emokpae Model Primary School, Western Boys High School, George Idah Model School and Esonere Primary School in Benin City, also ordered deductions from the salaries of some teachers who got to their schools after the 8a.m., resumption time.
The governor frowned at the lackadaisical attitude of some teachers to work, noting that “the state government had provided suitable environment in the schools.  The teachers are paid good wages and  allowances. These beautiful classrooms are useless if teachers don’t teach the students.”
The governor, who was at Asoro Primary School at 7:45a.m., went through the teachers’ attendance register and discovered that names of teachers, who were yet to arrive the school were signed in.
He directed that adequate punishment be meted out to those who filled in the names of the absent teachers. He said: “Any time a teacher does not show up in school, the students will be wasting their time. The head mistress will also be queried because she has the responsibility to explain to me why people were allowed to sign fraudulently on the register when they were not present.” 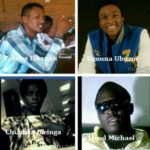