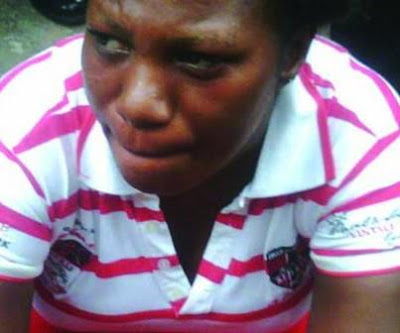 A 36-year old woman, Ngozi Onuonwu who was arrested in Lagos for her alleged involvement in kidnapping has opened up and said that frustration led her into it because she did not see any man to marry her. The remorseful Ngozi said if she had married like her mates she would not have lived with her younger brother, Chibuzor who got her involved in kidnapping…..continue reading

She narrated how the youths in her community at Umuleri in Anambra State engaged in a communal war with their neighboring community, Aguleri which lasted for several years.

She said many youths died and this affected many girls including her as they could not get married.

She said her fiancée died in the war and she did not get another man and so she had to move to Lagos and started living with Chibuzor.

When asked if Chibuzor was a victim of communal war, she said when peace returned to the two communities, the youths who participated in the fight were not de-mobilized.

The police in Lagos on Tuesday paraded Ngozi along with six other suspected members of her gang for allegedly kidnapping people in Lagos State southwest Nigeria.

The leader of the kidnapping gang operating in Festac, Lagos, Southwest Nigeria, Henry Emenike, 30, confessed that his gang made more than N20 million since they started kidnapping people in Lagos two months ago. Abia State-born Emenike made the revelation when he was paraded at the Police Headquarters, Ikeja, Lagos, Tuesday along with seven suspected members of his gang, including Ngozi.

The other members paraded with Emenike are Uche Ogbansi, 30, from Abia State, popularly known as Rasta; Emeka Obasi , 33, from Ebonyi State; Oliver Nwabueze, 30, from Imo State; a commercial motorcycle rider who allegedly provided his bike for their movement, Chibuzor Osuagwu, 29, also from Imo State and Ngozi.

Emenike told his interrogators that they successfully carried out more than four operations in Lagos where the victims’ families were made to pay various amount of money as ransom.

He said the last operation his gang carried out in Festac was foiled by the police and in the process the victim died.

He said he was in palm oil business in Abia state before he went into kidnapping.

Emenike said whenever they abducted a victim, they usually kept the victim in the care of Uche Ogbansi, popularly known as Rasta at Ago Palace Way, Okota, Lagos.

The suspects were arrested by the police at Festac and were brought to the command headquarters.

The Area Commander in charge of Festac, Mr. Dan Okoro, explained that the police trailed members of the gang before some of them were arrested while others are still at large.

He said that the gang was behind kidnapping incidents in Lagos, especially in Festac axis.