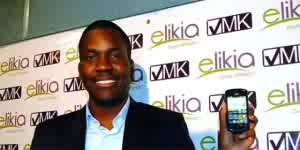 27-year-old Verone Mankou who introduced the smart phone said Elikia, the phone’s name means “hope” in the local language. Mankou, head of the company VMK, said the Android-powered device was on sale only in Congo for now, but he planned to launch it in other countries very soon.

The phone was initially due to go on sale in October but its launch was delayed “because of an explosion in demand,” he said.
Although the phone is Congolese by design, it is manufactured in China. It costs about 130 euros ($170, N26,545.50) — a considerable sum in this central African nation.

The phone has a 3.5-inch touchscreen, 512 megabytes of RAM and a 650-Mhz processor. Its camera is five megapixels, and it also comes with GPS and Bluetooth. Meet The Man Who Wears Shirt Made Of 22 Karat Gold