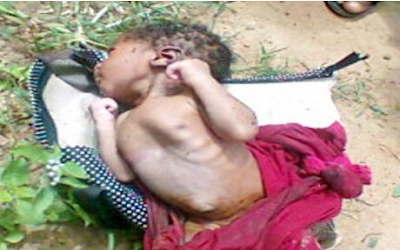 A baby boy suspected to be eight-day-old was found wrapped inside a bag and abandoned at a cemetery in Kakuri, Kaduna South local government area of Kaduna State yesterday.
The boy, who had maggots coming out from every opening on his body, was still alive, according to two good Samaritans who located him in the area.
Mr. Robert Ogbole, a student of Bayero University Kano and Miss Grace Yahaya, a Kaduna State athlete who found the baby, narrated their experiences to newsmen at the Kakuri police station where it was taken to after receiving first aid at a nearby hospital in Kakuri….continue reading
Ogbole said: “I was at home at about 11: 30 am when my younger brother (Mike), who passed through the cemetery to the football field came with a report that he heard the sound of a baby inside a bag at the cemetery. So, I quickly called my neighbour (Grace), and we ran to the place.
“On getting there, we found this baby boy rapped all over with cloth and was kept in the cemetery, so we picked him and this my neighbour helped to unwrap him, the baby had maggots coming from every opening of his body but was still alive.
“We then took the baby to Young Men Christian Association (YMCA) clinic in Kakuri where the baby was treated before we brought him to the police station.
“The nurse at the clinic confirmed that the baby should be about a week old and probably would have been in that condition for about four days,’’ she said.
When contacted, the Kaduna Police Public Relations Officer (PPRO), DSP Aminu Lawan, confirmed the incident.
“When the baby boy was brought to our police station in Kakuri, our men immediately swung into action. We have taken the baby to the Saint Gerard Catholic Hospital for necessary medical investigation and treatment. At the end of the treatment, we will process all the documents and hand over the baby to the social welfare for further necessary action.
Meanwhile, the PPRO said, the police will carry out necessary investigation with a view to unveiling the perpetrator of such dastardly act.
-LEADERSHIP

Audio Leak: Listen To The Coversation Between Dr Sid and Davido on D’banj’s Contribution Towards The Success Of Mohits Crew