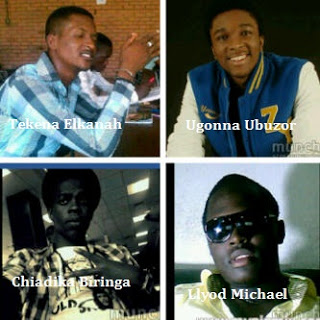 The Nigerian police were unable to stop an angry mob from stoning and burning to death, four students accused of armed robbery because they were chased by rock-throwing assailants, authorities said on Monday (yesterday) and this is a far cry from what Tekena’s sister said. She said the police actually told the mob to burn the boys. Read it HERE
The lynchings in Aluu  have caused outrage, with a video showing the gruesome killings of the victims, aged 18-20, having circulated through social media.
Police issued a statement on Monday laying out some of what they said were the circumstances of the October 5 crime, while also saying 19 suspects had been arrested, including the traditional leader in the community…..If you care to read the statement, click read more below

“The police on getting to the scene met a mob attack on four victims who were supposedly the suspected armed robbers,” the statement signed by Nigeria’s national police chief Mohammed D. Abubakar said.

“Attempts made by the police patrol team to take over the suspects were met with stiff opposition from the mob, who chased the team with stones.”

The four police officers at the scene then called for reinforcements, but they arrived after the victims were “stoned and burnt to death, while the mob immediately took to their heels,” the statement said.

It was not clear why police did not shoot into the air or fire tear gas as is often done to disperse crowds in Nigeria.

The police have arrested 19 suspects, including the traditional monarch of the Aluu community in Rivers State, Hassan Welewa, who has been accused of inciting the mob, it added.
Initial reports said that the students were accused of stealing phones and laptops, and the police said that they were suspected to be armed robbers.
A gruesome video of the attack near the oil city of Port Harcourt was posted on YouTube showing the students being stripped naked, beaten with sticks, doused with petrol and set ablaze with tyres around their necks.
The University of Port Harcourt has since been temporarily closed following the tension generated by the killings. 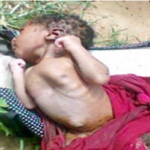