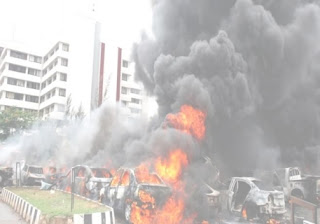 A new report by the Committee on Homeland Security Subcommittee on Counterterrorism and Intelligence of the United States House of Representatives, dated today, November 30, 2011, calls for focus on the threat Boko Haram poses to US interests and even the US Homeland.

The report, “BOKO HARAM: Emerging Threat to the U.S. Homeland,” which was signed by the Chairman of the subcommittee, Rep. Patrick Meehan, and a ranking member, Rep. Jackie Speier, draws attention to recent US experience in which its intelligence community underestimated the intent and capability of such terrorist groups as al Qaeda in the Arabian Peninsula, and Tehrik-i-Taliban Pakistan (Pakistani Taliban) to launch attacks against the U.S.

It notes that Boko Haram’s August 26, 2011 suicide-bombing of the United Nations House in Abuja, Nigeria, using a vehicle borne improvised explosive device (VBIED,) was the first time the group had targeted an international entity, and marked “a significant shift” in the targeting and goals of the group.

“Boko Haram’s attacks are occurring at their greatest frequency since the sect emerged from hiding in 2010,” says the report. “The sophistication of its tactics, use of the Internet, and its recent attack on the U.N. headquarters in Abuja all point to a dangerously evolving organization.”

Exploring options for engaging Boko Haram, the report expresses the confidence that the new threat is a “unique window of opportunity” for the US. “If the U.S. acts quickly on the military, intelligence, and diplomatic fronts, it can ensure the relative protection of U.S. interests while assisting the Nigerian government in containing Boko Haram,” it says.

It describes the deteriorating security situation in Nigeria is a cause for concern, especially as Boko Haram’s attacks become more sophisticated, coordinated, and deadly, and also that further instability in Nigeria could force the country to pull out of various United Nations peacekeeping missions, which would be significant because Nigeria is the fourth largest troop contributor to UN peacekeeping missions in the world.