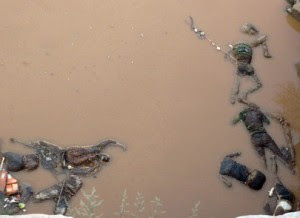 I wrote about this story when it broke HERE and later when ”they” said it was that of MASSOB members HERE but now according to nationaldailyngr The mystery surrounding the dead bodies found floating in the Ezu River, Anambra State has finally been unraveled. The bodies belong to suspected kidnappers who have been terrorizing the South-East zone.

Investigation revealed that leaders of the zone have been greatly disturbed by the unbridled activities of notorious indigenes of the zone who have decided to derive pleasure from snatching their kith and kin for money. And in order to curb this activity, the leaders reached an unwritten agreement which is to deal with apprehended suspect extra-judicially.

Some of the states in the zone including Anambra made their House of Assembly to pass an Edict making kidnapping punishable by death.

But the law as developments would later prove has not deterred the men prone to this cruel means of making money from engaging in their terrifying activities.

It would be recalled that to press matter home, some 1000 indigene of Anambra staged a protest complaining to the State Government the effect of the activities of these men is having on their means of daily survival. Because of the rate of this nefarious crime, most children of the state living abroad have refused to come home for visits thus denying them access to much needed foreign currency useful in their daily upkeep.

The protesters which included women and children cried to the Governor to find means of dealing with the issue.

Investigation revealed that most of the bodies belonged to suspected kidnappers arrested between October and November last year. And reluctant to follow the long route of prosecution, the state in connivance with the security decided to terminate the lives of these men.

Although, the initial plan was to conduct a mass burial, the men charged with the task later changed their mind in view to the task involved. But their solution has since backfired with the whole world wanting to know what triggered the dumping of such a number of bodies in the river.

Insiders informed that recent police denial of the claims made the by the Movement for the Actualization of The Sovereign State of Biafra (MASSOB) that some of the dead bodies were its members was not far from the truth but that associations do at times cut across and that some MASSOB members might have had links with kidnappers in the region, and that some existing MASSOB members may still have.

It would be recalled that the police boss in the state, Ballah Nasarawa, on February 12, 2013, no member of the movement was either killed or dumped in Ezu River by the Police.

While briefing newsmen at the police headquarters located in Amawbia, Nasarawa revealed that the names mentioned by MASSOB as some of its missing members were not in the records of the state command, adding that as far as the police were concerned, MASSOB remained a proscribed body by the government.

He said, “As far as Anambra state police command is concerned, MASSOB had been proscribed by government and must remain so. Therefore,  any person that hides under the protection of MASSOB, or any illegal organization for that matter, and commits any criminal act, will be arrested and prosecuted’.

He stressed that that the command was  putting the records straight,  adding that all suspected criminals arrested under the guise of MASSOB were dully charged to courts.

Earlier at the beginning of the debacle, the Civil Liberties organization (CLO) in Anambra State had accused the Anambra State Special Anti-Robbery Squad (SARS) of complicity in the discovery of 50 dead bodies floating in a river in the state.

The State Chairman, Comrade Aloysius Attah and Secretary, Comrade Justus Ijeoma in a press statement pointed accusing finger at the Special Anti Robbery Squad (SARS) saying they contended that litanies of extra judicial killings have been rampant in the state insisting that government should investigate the activities of the body.

But the State Police Command through the Police Public Relations Officer (PPRO) Mr. Emeka Chukwuemeka denied the allegation, describing it as untrue and added that there were no bullet wounds on the bodies of the corpses.

Chukwuemeka stressed that an autopsy is already been carried out by a team of specialist on the bodies and that such insinuations would affect investigation into the matter.

The villagers of the small and obscure town of Amansea located at the border of Enugu and Anambra State woke up to discover dead bodies of able bodied young men floating on their river known as ‘Ezu River’ which empties into Anambra River from Agba Ogwudu River in Enugu State.
Information gathered by National Daily then revealed that some villagers went to fetch water from the river in the morning only to discover dead bodies floating slowly, with some wedged on the banks of the river.

After counting up to 50 bodies, they quickly alerted their traditional ruler, Igwe Kenneth Okonkwo who mobilized his cabinet for an emergency meeting after which the state government and the police was contacted.

According to the traditional ruler who looked dazed, “I have never seen this kind of incident; in fact I do not know how to describe it. Able bodied men wasted and dumped in our river major source of water for us and other communities close to us. I cannot say actually how many bodies that were dumped inside the river but all I know is that they are too many,” he said.

The CLO had further claimed that one Olisa Ifedika who is said to be a kidnapping kingpin in the state and his gang who were arrested and has been in custody of the police is among the dead bodies found at Ezu River.

“We scrutinized the bodies and saw a mark with which he is known,” a source told National Daily but the according to the police PPRO, Mr. Emeka Chukwuemeka, the suspect is alive and in their custody where “he is helping police with investigations,” he said.

The CLO demanded that if the police are sincere in what they are saying they should present the suspects to the public; a demand that has not been met as at the time of writing this report.
Out of the total number of twenty two decomposing bodies evacuated from the river, 19 were earlier given a mass burial close to the river, but the uncertainty surrounding the deaths necessitated that three out of the lot were taken for autopsy procedures on them.

National Daily investigation gathered that following the accusations by the CLO on the state police command, the Inspector General of Police, Mohammed Abubaker, dispatched pathologists from the Police Force Headquarters, Abuja to be part of the team to forestall foul play.
The bodies were taken to the Nnamdi Azikiwe University Teaching Hospital, Nnewi, for the autopsy.

The police established that of all the deceased victims, none was a female adding that while some wore only singlet, others wore only pants with some others boxers. Nasarawa also confirmed that there were no gun injuries or machete cuts on their bodies as earlier speculated. Nasarawa stated further that investigations were still continuing on the matter, assuring that the police would be providing additional information on the matter as they became available.

He also explained that the bodies had gone so bad, having been buried for over one week and urged those seeking information on the matter to be patient until he had adequate information to give on the findings of the autopsy.

Ikeako noted that the state government had already picked a bill of N1.5 million from the morticians and those who evacuated the bodies, even as more bills were being expected for the autopsy proper and embalmment.

National Daily learnt that the bodies were dumped from  the top of the bridge at Amansea into the river few days before the shilling discovery and the question on the lips of people of Amansea and beyond is; when will the truth behind the dumped dead bodies be told?

According to the men sent by the traditional ruler of Amansea, Igwe Kenneth Okonkwo to find out what happened; they said they saw traces of what looked like blood on the bridge, even as there was no sign of scuffle in the area. In their thinking, the victims were killed elsewhere and brought to the river where they were dumped but the police on their part said there were no bullet wounds on the victims’ bodies.