It has been revealed that the mother of 22-year-old Michael Adebowale, one of the two Islamic terrorists who hacked a British soldier to death in broad day light, actually tried desperately to turn him away from extremism but “could not get through”.
His mother, 43-year-old Juliet Obasuyi, is a Christian probation officer and a member of staff at the Nigerian High Commission. The boy’s action is now causing her trouble…
According to reports, Michael had been a “lovely boy” but became involved in some “serious trouble” as a teenager and then turned to Islam. He started mixing with some “bad people” and became increasingly extreme in his views.
His mother Juliet, a probation officer, went to her friend and neighbour, a 62-year-old security officer, for help about nine months ago after her son dropped out of university.
She told 62-year-old man: “Michael is not listening any more. His older sister is a good Christian with a degree but Michael is rebelling as he has no father figure, dropping out of university and handing out leaflets in Woolwich town centre.
“He is from a strong Christian family but he is turning to Islam and turning against the family. He is preaching in the streets. He needs spiritual guidance before he radicalizes himself.” 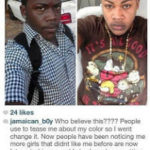