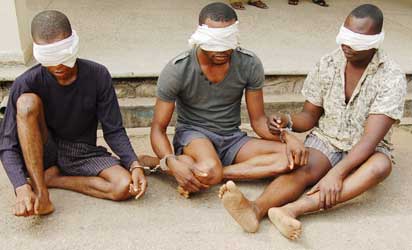 Kidnappers of Madam Titilayo, the abducted wife of former governor of old Western Region, Brig-General Oluwole Rotimi, have confessed to receiving a ransom of N13 million from the embattled family before her release. Titilayo Rotimi was kidnapped at Egbe along New Ife Road in Ibadan, Oyo State capital, early December last year and released only four days to Christmas.
One of the suspects, Godwin Mfom, who was paraded alongside two others by the Oyo State Police Command in Ibadan yesterday, said the gangsters collected N13 million from the Rotimis before effecting the release of the abducted woman.
Godwin Mfom was paraded alongside Akaniyere Sunday and Kingsley Johnson. Speaking further, Mfom said the kidnap was masterminded by one Daniel Effiong, a former staff of the woman, after Mfom had told him of his desperation to get money to pay the debt he incurred after his involvement in politics in Akwa Ibom State where he contested for councillor and lost.
Mfom said the abducted woman was kept in a rented house in Ala-Ijebu, Ogun State, saying the gangsters had told the caretaker of the unused building that they intended using it as a residential place with their business in Lagos.
The suspect also said his own share of the ransom was N5 million, saying he bought a Honda car with N1.2 million out of the money after paying his debt.  He said he was left with N2.5 million after the immediate expenditure.
The 38-year-old Godwin Mfom, who said the kidnap Titilayo Rotimi was his third act, said Effiong, the ring leader, was mobbed to death in Ilasamaja area of Lagos last month as he was accused of insanity.
The state police public relations officer DSP  Ayodele Lanade confirmed her release. 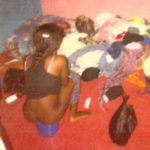