This 49-year-old devil Sylvester Ehijire paraded in Lagos by the police for having carnal knowledge of both his seven-year-old daughter (since when she was six) and 15-month-old grand daughter as well as 23 years old daughter. Hear the seven-year-old: “Every time my mother was not at home, my father will call me, dip his finger into my anus and his manhood inside my virgina. He would then promise to buy me biscuit and toy cars if I did not tell anybody.There is no Sunday that he did not do it.”..What do you think of this man?

Read the full story when you continue

A seven-year-old girl (name withheld), has accused her 49-year-old father of rape.

The girl said her father, Sylvester Ehijele, had on numerous occasions had sex with her, adding that he used to promise to buy her goodies and toys before the actions.

She said he usually had sex with her on a daily basis whenever her mother was not home.

She said, “Whenever my mum is not at home, he grabs me, forces his hand over my mouth and then inserts his penis into my private part. He promises to buy me a car, cake and biscuit but he doesn’t buy anything for me.

“He also threatens to use a knife to gouge my eyes out anytime I threaten to report to my mother.”

Sylvester’s wife, Margaret, told PUNCH Metro that he (Ehijele) also raped their 23-year-old daughter when she was much younger and recently, he raped their one-year-old granddaughter that lives with them.

She said, “I am a caterer. In 2006 I went to Abuja for a catering job where I spent five days. But at about 1am, my first daughter, who was about 17-years-old at the time, called me on the phone crying that her father raped her that night.

She said in 2011, Sylvester’s family settled their differences and urged the couple to reconcile for the sake of the children.

She said her husband swore never to touch any of his daughters again and she reluctantly returned to her husband’s house.

Margaret said she was however disappointed to find out that less than a year after moving in with her husband, he went back to his old ways.

She said, “We reconciled in May 2011 and I really thought he had changed but in August last year, I caught him in a compromising situation with our seven-year-old daughter. I called her out and she told me how her father had constantly been abusing her.

“Again, I confronted him and he beat me up. I had to pick my daughter and ran to his brother’s house, where I stayed for three days before I went back home.”

Mrs. Ehijele said she continued to cope with her husband’s ways until he finally raped their 15-month-old granddaughter.

She said, “Because my oldest daughter works, we decided to put her daughter baby at a day care in Ejigbo. I have always been the only one that brings her back at 6pm everyday from the day care. But on that particular day, my husband went to the day care and after an altercation with the teacher, he took the baby home.

“He took the baby home and hours later the baby was crying profusely. When I got home, the baby was still crying and I wondered what was wrong. When I finally took off her diapers so I could bathe her, I noticed she was bleeding in her private part. When I raised the alarm, my husband was unnerved. That was when I suspected him.

“I rushed down to the Ejigbo Police Station and reported the matter.”

Margaret said she had been married to the suspect for over 23 years and lamented that he had had carnal knowledge of all their daughters.

“I have two daughters, four sons and a granddaughter. Sadly, my husband has raped all of the females,” she said.

The Police Public Relations Officer, Ngozi Braide, said the suspect would soon be charged to court on charges of defilement.

“The suspect is in the habit of sleeping with his daughters and now his granddaughter. We have the doctor’s report which shows that the girls have been defiled,” she said.

A copy of medical report issued by the Isolo General Hospital reads in part that, “The vaginal hymens of the girls are no longer intact.”

Sylvester however denied the allegation, adding that it was his wife that poisoned his daughters’ minds against him.

He said his wife left him initially because he had refused to pay her dowry.

He said, “If I was the one that raped them, let me die. My wife and I were separated for four years and it was because her family said I hadn’t paid her bride price. After we reconciled, she told my daughters to tell lies against me in order to disgrace me.

“Even my oldest daughter confessed to my family that I never raped her and that it was my wife that told her to lie.”

When quizzed about the medical report, Sylvester said it was not authentic. 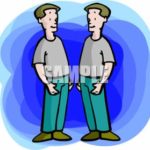