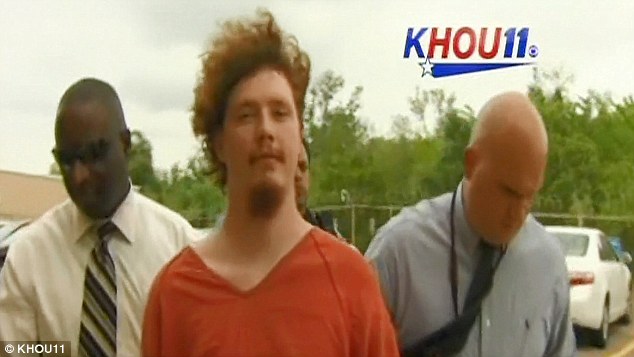 Three students bravely subdued a classmate who went on a stabbing frenzy at a Houston community college today – and then promptly posted pictured of their heroism online.
The knife-man now charged with three counts of assault with a deadly weapon is Dylan Quick, 20, a fellow student suspected of knifing 14 people this morning at Lone Star College’s Cypress campus.
Steven Maida, Erik Bertrand, Ryan Ballard and another student named James managed to wrestle the armed man to the floor and waited for law enforcement to arrive, KHOU.com reported.
And in a very modern take on heroism, Maida posted a picture of the suspect onto his Instagram account, explaining how he ran to intercept him as the stabbings began and then an hour later posted a congratulatory self-portrait of himself inside a police car after his bold act….Read his account of what happened when you continue:
The HERO
‘I was walking back from the cafe and bookstore and I see people running different ways and I thought it was a tour.’
‘Then I hear someone say my friend has been stabbed and then this girl walks out with a hole in her cheek.
‘I said where’s he at? Where’s he at?’
‘So I go inside, upstairs and as I do, another girl has a hole in her throat and I looked up at the staircase and there is blood on the staircase.
Rushing around the science block looking for the assailant, Maida and the others had the unidentified man pointed out to them by other frightened students.
‘We ran outside but he was 100 feet in front of the security guards, but they were taking their time,’ said Maida.
‘He takes us through the building and almost loses us, but one girl said he went that way – we saw him, we chased him and we tackled him down.’
Explaining that the assailant held a knife, Maida told Fox News the weapon was out of sight.
While one student grabbed his back-pack Maida and James pulled him down by his arms, which caused him to scream out ‘I give up, I give up’.
‘His hands were in the air and he said ‘I give up.’ … I was screaming at this guy, I was just like, ‘Why!? Why would you do this to girls!?’
Maida said he wasn’t scared during the extraordinary attack.
‘I don’t know why I wasn’t. I guess you grow up in Houston, you’re not scared of that kinda stuff.’
Ballard told the Houston Chronicle about how the group stopped the attacker.
‘I’m a pretty big dude,’ 6 feet 4 Ballard who weighs about 235 pounds told the newspaper.
‘I pushed him down with my elbow and I had my knee on his back while he (student) was holding his face in the ground.’
‘If we wouldn’t have stopped him, who knows what he would have done?’
Police thanked the students for intervening.
‘Some of the details in the call slip did indicate that students or faculty were actively responding to work to subdue this individual,’ said Harris County Sheriff Adrian Garcia.
‘So we’re proud of those folks, but we’re glad no one else is injured any more severely than they are.

Hottie Of The Day – Marc Jacobs