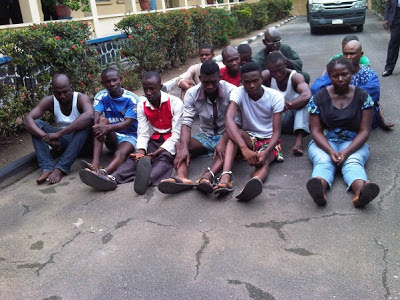 The 13 suspects arrested in connection with the murder of four UNIPORT students have been charged before a Port Harcourt Magistrate on a five-count charge of conspiracy and murder and were yesterday remanded in prison till the case comes up again in December. Three of them spoke to the press and 30 year old David Chinase Ugbaje said a policeman joined in beating the youths while another policeman begged on their behalf. The Nigeria Police Force has also dismissed the policeman who was part of the mob that killed the students. The policeman has been identified as Lucky Orji.

David Ugbaje’s recount“Around 7 am, I left my house. I dressed up to go to work. On my street, I saw a crowd of people with four unclad boys, who were being led into my compound, No. 9, Royal Villa in Omuokiri-Aluu. I said what was the problem and they said the boys were armed robbers. I said that is my compound, let us go and see the person, if he is their member or let them point the particular person, who is their member they were going to look for”…..continue reading

I opened the gate, they entered. A crowd of people that I could not control. They entered the compound. They pointed to the room of one of our co-tenants, whose name is Bright. They said one of the boys was staying with Bright. When they got there, Bright’s door was locked. Some people wanted to break the door. They started beating the boys. Very serious. Along the line, two policemen came around. One of the policemen was pleading. The other policeman joined in beating the boys and later said the crowd should hand over the boys to them, but the crowd said ‘no’. ‘We no go gree, we no go gree’.

“As the policemen were leaving, they said whatever this thing was going to bring, you would bear the result. Since I live in the yard, I said if I stayed there and the people were killed, automatically, the house would be in trouble. We are now in trouble. I brought out my belt; I started flogging people and asked them to leave the yard. I was beating the people (crowd) very seriously”.
“One Ikwerre man in the crowd asked why I was beating the crowd for the boys to be moved from our yard. I continued to beat the crowd to carry the boys to where they brought them from. I drove them out of our compound and gate. They injured me in my hand, when I was trying to open the gate”.
“I started flogging for them to leave. There is water in our (house’s) frontage. They went there and soaked the boys (four) inside the water. I discovered that one of the boys was my customer on campus, at the University of Port Harcourt, where I work. He was an Igbo student. I asked the boy: are you a student?
“If you watch the video, you will see me where I held a belt, asking the boy. The boy told me ‘no’, that he was not a student (of UNIPORT). Quite all right, I knew him very well. He once bought slippers from me and used to repair slippers from me. I am a shoemaker at UNIPORT”.
Maybe the boy was afraid to tell me he was a student. There was nothing I could do because of the crowd. If I talked more than that, they could join me with them.
“The beating was going on, here and there. At the end, they finally moved the boys out of my street. I then went out. My wife has just been delivered of a baby.”
On his role in the lynching of the four students, Ugbaje said: “I flogged the boys twice.”
Amadi’s account of what happened“I live at No. 9. Royal Villa in Omuokiri-Aluu. I am from Ikwerre. I work at UNIPORT. I am a printer. I do photocopying and binding. In the morning on that day, I dressed up, as usual, so that I could go to my work. When I came out at the junction, so that I could pick a bike, I saw a crowd of people, with four boys. They were unclad, with tyres on their necks”.
“I shifted a bit, but to verify what was happening, they told me the four boys came to rob. I asked where they were taking them to. They said they were taking them to No. 9, where I live”.
They said they mentioned one of our neighbours. That they came to look for him as well.“I followed the crowd. Before I reached my estate, they had already reached the house with the four boys in front of my neighbour, Bright, from Ogoni. They said they were looking for one of the boys. Before they came, the back door was locked. Some of the people in the crowd said they were going to break the back door. Others said no, they should leave the door, since Bright was not around. At the end, they started beating the boys”.
“They started beating the boys. In the process of beating the boys, policemen came, but they said no, they were not going to leave the four boys. I called this my neighbour (David Chinasa Ugbaje), with other neighbours, that we were not going to allow that kind of thing to take place in our estate that we would be in trouble.
“This my neighbour (Ugbaje) collected his belt. I collected a small stick, and we started chasing people, flogging everybody, to take the boys out of our yard. We started pushing everybody out, including the four students. They left their tyres, I said they should take their tyres out of the yard and we locked our gate.“I flogged everybody, including the four boys, for everybody to go out. I beat one of the four boys twice and the other one, I beat once.
Segun Lawal“My name is Segun Lawal. I am from Osun State. I live in Omuokiri-Aluu. I was in the house, around 6:30 am to 7 am. I am a taxi driver. I saw a crowd and I parked my car outside. I saw a police vehicle coming and I followed the police. I saw four policemen. I saw the policemen enter the gate”.
“As I reached the gate, they were beating the boys. I had to raise my hands up, to defend the boys. If you watch the video, you will see it. I wore blue polo shirt. I started pleading for the crowd not to kill the four boys. They did not listen”.
“The Policemen left immediately. I had to leave. As I left, I went to GRA (Port Harcourt); one of my customers called that I should take him to Obudu Cattle Ranch (in Cross River State).“I came back on Saturday night (October 6). I was in my house. Policemen came to arrest me. I never had this type of experience. I told the police that I was not around. That I traveled to Obudu. I did not beat the four boys. 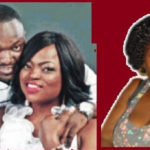