I can’t even imagine this couple’s horror at what they claimed happened during a time that is supposed to be special. A Missouri couple is suing a team of doctors for allegedly decapitating their baby during delivery and trying to cover up the stunning surgical mistake by pushing him back into the mother’s womb
Parents Arteisha Betts and Travis Amonnette of Florissant, Missouri filed a lawsuit in September, claiming obstetrician severed their baby’s head from his body while tring to yank him from the birth canal during childbirth. The couple accused doctors of forcing them to have a vaginal birth when the mom to be Betts was scheduled by another doctor to deliver through C-section…..continue reading
Dr. Susan Moore allegedly told the couple during a February 2011 appointment, that their baby had an unusually large stomach and would not be able to be delivered through a normal birth.
However, when mom Betts reportedly went into premature labor on March 22, only 28 weeks into her pregnancy and was rushed to St. Johns Mercy Medical Center in St. Louis, the delivery doctor on duty, Gilbert Gibbs, forced them into attempting a vaginal birth instead of the C-section Dr. Moore had proposed.
Dr. Gibbs allegedly flatly refused to deliver the baby unless the mom did a normal birth. The doctor also stopped them from going to another hospital. That was where everything went horribly wrong.
The complaint:

The lawsuit reportedly claimed Dr. Gibbs, unable to get the baby out because it was a breached birth, continued to pull the baby out by the head, subsequently dislocating the spine and separating the head from the rest of the body. Blood reportedly spurted out of the baby’s neck in full view of the parents.
The incompetent doctor reportedly tried to cover up what he had done by pushing the baby back into the birth canal, then doing the C-section he should have done in the first place. Only now it was too late and he is accused of cutting the mother open without even waiting for the anesthesia to take effect.
The hospital is not being sued at this time, but doctors Wilbert Gibbs and Susan Moore, Midwest Maternal and Fetal Medicine Services, along with Signature Medical Group, are all being held liable in the couple’s lawsuit. 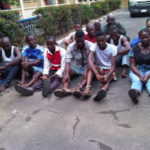