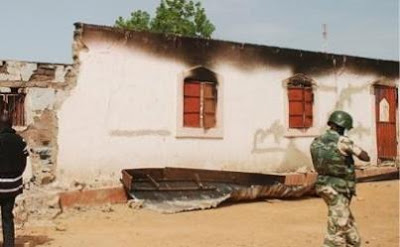 The Islamic terror group, Boko Haram
yesterday, burnt down the Gwange 3 Primary School in Maiduguri
Metropolitan. This brings to 9 the number of schools burnt down or deliberately destroyed by this terror group since this year.


The attack was carried by the terror group members riding on a tricycle
who stormed the Primary School armed with AK-47 guns. They were
shooting sporadically and later set the school on fire.

There was no reported casualty as the pupils are still on their long holiday…. abi they dont want us to attend school again????