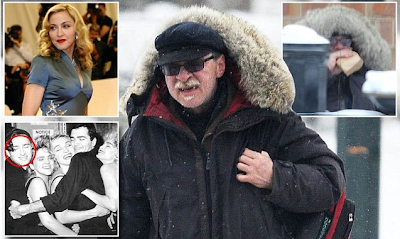 Mega rich pop star Madonna’s brother is a homeless drunk living on the streets of a town in Michigan.

Pop queen Madonna has legions of fans. But her estranged brother, Anthony Ciccone, isn’t one of them. Ciccone, 56, is a homeless alcoholic who has lived on the freezing streets of Traverse City, Mich. For almost three years. And he’s stoking the family feud between him and his famous sister.

“Madonna doesn’t give a s-t if I’m dead or alive,” Ciccone told the Daily Mail. “She lives in her own world. I never loved her in the first place, she never loved me. We never loved each other.”

Ciccone spends his time drinking alcohol from paper bags, just 12 miles away from the Ciccone family Vineyard, where his father and step-mother live.

According to the UK paper, Ciccone was recently thrown in jail for a month after an incident in which he was intoxicated and swearing at children in front of a church.
He blames his family for the tragic situation.

“No family backup, when the chips fell, no family backup,” Ciccone said. “I’d rather be working. What would you do under these circumstances when your family has stood against you completely?”

But neighbor Kathy Mateyer, who works in the Ciccone family vineyard’s winetasting room, tells a different story. In her eyes, Madonna and Anthony’s father is devastated by Anthony’s failure to get help for his alcoholism, and refuse to allow him back until he stops drinking.

“He would sneak into the cellars and he would lay on the floor, open up one of the big tanks, and drink the wine with a glass,” Meteyer said to the Mail. “They think [returning] would kill him. It already kind of has.”

Though it may sound as if Madonna, 54, is heartless when it comes to her older brother, the songstress, whose wealth recently reached the $1 billion mark, has apparently tried to reach out to Ciccone several times. Meteyer said the superstar paid for her brother’s rehab stints “several times.”
His father and other siblings have attempted to reach out to Anthony repeatedly.
“Anthony just won’t accept help,” Meteyer continued.

Ciccone made headlines when his homeless state was initially discovered in 2011. He isn’t comfortable with his newfound tabloid fame,

“Crazy people chase me around because my sister’s famous,” Ciccone said.

“Evidently various people have been pestering her about matters of neglect regarding family and such. I think she’s probably a little bit p—-d off with me or even troubling her. But I’ve never asked my sister for anything,” he continued. “She don’t owe me nothing.”

“I’ve got no beef,” ciccone said. “If she wants to live that way, that’s her thing.”