No fewer than 11 people were burnt to death on Sunday in an auto accident at Macmillan area, Soka bus stop, Lagos-Ibadan Expressway, Ibadan.
According to eyewitnesses, the accident happened after the propeller of a commercial bus (Mazda) from Ogido in Ogun State broke and hit the fuel tank.
An eyewitness, who gave her name as Jelila Adekeye, said, “The vehicle went up in flames in the process. The burning bus also veered off the road. “The driver and the two passengers on the front seat escaped. The others were not so lucky as they were unable to open the side door.”
Eight adults and three children were said to have died with 13 passengers, including the driver, sustaining various degrees of injuries. The casualties were rushed to Adeoyo and University College Hospital, Ibadan.
Peep a pic when you continue, PLEASE VIEWERS DISCRETION IS ADVISED 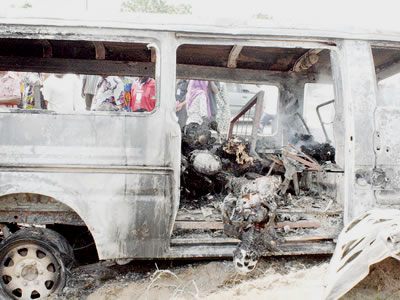