Same-sex marriage advocates get started at a young age in Australia, as evidenced by four-year-old Sabrina Franco’s touching, letter to Prime Minister Tony Abbott. “Not only does Sabrina have an excellent grasp of the English language for a four year-old, but she is also incredibly aware of grown up stuffs and am begining to wonder if it’s not her mum’s friend who wrote the letter, cos i cant remember reading any book when i was little where a girl and a girl or boy and boy lived happily forever lol….
Sabrina wrote the letter, complete on Disney princess paper , after learning about how her mother’s friends Lukas Picton and Greg Stone went to New York, USA, to get married because it wasn’t legal or recognised in Australia…
The letter reads:


“Dear Tony Abbott,
Don’t get rid of the ABC because we love it. And let boys marry boys and girls marry girls if they love each other or they’ll be sad forever.
Thank-you.
Sabrina.”

Peep Sabrina’s photo when you continue! 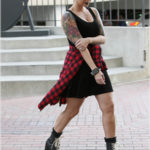