Wow wow, am so happy 24 is back.It’s one of my old time favourites, followed by Alias and i cant wait to find out what happened to Jack Bauer after he was told by the President to disappear and the drone shut down.
Well, now we know….According to the producers, Jack Bauer is back and his on the run in London.
Using the tag-line ‘Live Another Day’, FOX producers told the audience at 2014 Television Critics Association Press Tour it picks up events four years on, with Bauer evading the FBI.
The hugely-successful show, which ran for 192 episodes between 2001 and 2010, had a distinctive real-time format, with interweaving plotlines and a countdown towards the heroic counter-terrorist saving the day, making it an iconic piece of television.
But Sutherland, 47, admitted to being nervous about bringing 24 back.
“I’m about as anxious and wound up as I’ve been in a long time,” he said.
“There’s a great impetus for all of us to create something new with the show.”
Filming in the capital will take place in February, but the actor is not expecting a warm welcome, telling the conference: “I’m sure we’ll be hated by a large portion of London for snarling up their traffic here and there, and for that I apologise in advance.” 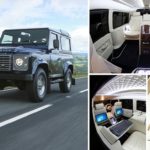