“Beyoncé doesn’t just sit at the table. She builds a better one”, is what Sheryl Sandberg wrote about Beyonce as she tops TIME’s 100 Most Influential People list. TIME named Beyonce a titan, and she has some pretty heavy hitters joining her on the list.
Beyonce rocked the world last winter when she released her self-titled album with absolutely no promotion. Following the release, she completed a successful world tour, with Blue Ivy and her husband in tow.
Joining Queen Bey on the list includes actors, politicians, world leaders and athletes. But rounding out those in the African-American community, the list includes Barack Obama, Eric Holder, Pharrell Williams, Serena Williams, Jason Collins, Kerry Washington, Richard Sherman, Steve McQueen and Key and Peele…..
TIME also recognized several activists, religious dignitaries and actors from various African countries:   Thuli Madonsela, Ngozi Okonjo-Iweala, Sister Rosemary Nyirumbe, Ory Okolloh, Ertharin Cousin, Aliko Dangote, Imam Omar Kobine Layama, Archbishop Dieudonné Nzapalainga, Rev. Nicolas Guérékoyame-Gbangou and  Binyavanga Wainaina.
Congrats to all who made the list! 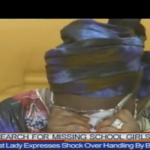