Theresa Roemer, a Houston area entrepreneur, has what is considered the largest closet in America. She recently gave Good Morning America & local news station KHOU a peek inside her glamorous 3-story, 3,000 square foot, “female man-cave” in The Woodlands, only to end up getting robbed. When showing off goes wrong!

A woman with the largest closet in the America now has a room full of empty space.
Theresa Roemer says someone cleaned out her closet late last night.

But last night when Roemer and her husband returned from dinner, she says someone stole all her Birkin bags, jewelry and furs. The suspects remain on the run.

They probably showed her house and everything. It’s not like The Woodlands is a huge place. I’m sure someone knew her. Though I feel sorry for her I can’t help but to ask…. who has the hook up on those bags, though?….Check out Theresa’s closet before she got jacked below. Authorities say the intruder entered through a bathroom window. Surveillance video given to Montgomery County property detectives and crime scene investigators shows a suspect wearing a jumpsuit and gloves.

What’s left, paper stuffing on the floor, empty jewelry and bag displays.
Roemer says she built the half million dollar closet to hold fundraisers inside and auction off her designer collections to raise money for charities.

“There was a lot of good that was coming out of this closet. It was not just a display of vanity,” Roemer said.

Roemer says the intruder was a pro who did his homework. Some less expensive items were left behind like pearls, diamond rings and watches.
She says what hurts the most is that the intruder took things that can’t be replaced, family heirlooms and a locket that had a strand of hair from her deceased son.

“To take the things that mean the most, that you can’t replace, that’s what’s the most hurtful,” she said.

“I know that I’ve been through harder things in life. I buried my son in 2006 from a tragic car accident, and this is a drop in the bucket compared to that. And if this person thinks that they’ve ruined me because of what he’s done to me, then he’s got another thing coming,” said Roemer.

Roemer says she does believe all the media attention in recent weeks contributed to her getting burglarized. 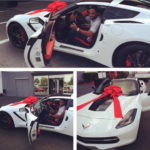