Menu
A new document has detailed a plot by the Peoples Democratic Party, PDP, to influence the electorate, and elaborately rig Saturday’s Governorship and State House of Assembly elections in Kaduna State. A document, entitled “The Task Before PDP and Governor Yero” obtained by PREMIUM TIMES, detailed the “means, measures and ways” to be adopted by the party and its candidate, Governor Ramalan Yero, to win the election based on the voting behaviour of the electorate in the state.

It also recalled that in the previous analysis for the Presidential and National Assembly elections, almost all the projections came to pass and “therefore, the need to implement this very submissions becomes imperatives because all the findings contained herein are like gospel truth”.

According to the document, dated April 2, the first step to cornering illicit votes is for the handlers to avoid being detected or exposed, to avoid judicial proceedings or inimical response from agents of the opposition parties or Election Observers.

The document said since the All Progressives Congress has an advantage in Southern Kaduna, “election materials distribution should be delayed, the means of dividing of the minds of the electorate should be initiated (while) the ad-hoc staff should be reached out and compromised.”

The document also said in areas where the PDP has advantage, “efforts should be made for speedy accreditation of large number of voters, manipulation of figures should be exercised in a profound way and where possible, ballot boxes stuffing must be effectively ensured”.

It also said during collation,

“areas such as Zaria LGA, Igabi LGA, Kaduna – North LGA and Sabon – Gari LGA with Soba LGA should be collated and announced on time to allow for the assessment of their performance in relation to areas where we have advantages. It is also expedient to frustrate voters, if possible reduce their numerical advantage by either disenfranchising them or deploy other methods.”

The document suggested that effort should be made to set up a committee to immediately, identify, locate and discourage the members of PDP that are either aggrieved or not satisfied with the PDP and are ready to vote against the PDP or conduct anti- party activities during the election.

It said concerted efforts should be made to employ the services of ad-hoc staff to sabotage or compromise the performance of the Card reader.

The document warned that time is of essence and that three days before the elections, all feedback that are related to these steps, means and methodology should be analysed and appreciated for effective deployment.

“It was discovered that in Southern – Kaduna there will be tremendous voter’s apathy which will drastically reduce the numerical advantage of the PDP,” the document said.

“Efforts should be made to immediately correct this anomaly. By popular observation, it is understandable that crisis and flash points will be experienced during the gubernatorial elections which will truncate the entire process.

“Furthermore, we have started preparing for an update or a follow up to this submission immediately we finish our compilations.”

Efforts to reach officials of the Kaduna State chapter of the PDP were not successful. Its chairman, Gaiya Haruna, did not pick calls made to his mobile telephone. 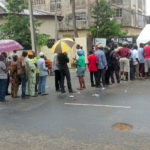