Menu
Today, Nigerians vote in their fifth general governorship and state assemblies elections since the country’s return to democracy in 1999. Voters in Nigeria’s 29 states would elect governors while new state assemblies would be elected in the 36 states.

There are no governorship elections in Edo, Ondo, Ekiti, Bayelsa, Kogi, Anambra and Osun because the tenures of their governors are yet to expire.

But the APC also has an advantage. It won the March 28 presidential and national assembly elections and it is expected to win some of the states presently under PDP control.

Analysts however believe the race is tight and a winner is difficult to tell before the votes are counted.

The elections are now underway across the country… 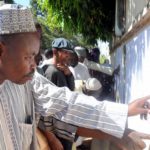