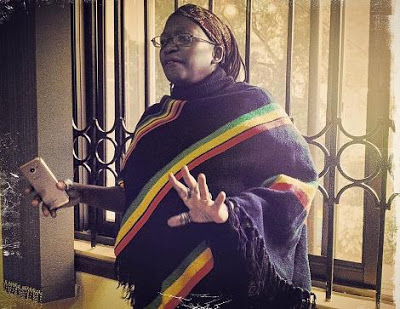 The 42-year-old mother of two said the young man lied to her about his age as he is only 22 and not the 27-year-old he claimed. She also talks about the guilt and shame she feels as she is aware she is old enough to birth the said lover. 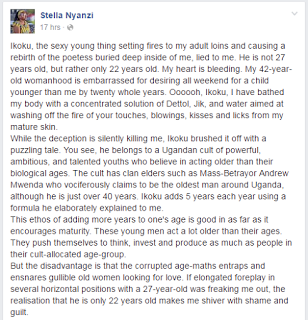 ‘Ikoku, the sexy young thing setting fires to my adult loins and causing a rebirth of the poetess buried deep inside of me, lied to me. He is not 27 years old, but rather only 22 years old. My heart is bleeding. My 42-year-old womanhood is embarrassed for desiring all weekend for a child younger than me by twenty whole years. Oooooh, Ikoku, I have bathed my body with a concentrated solution of Dettol, Jik, and water aimed at washing off the fire of your touches, blowings, kisses and licks from my mature skin.

While the deception is silently killing me, Ikoku brushed it off with a puzzling tale. You see, he belongs to a Ugandan cult of powerful, ambitious, and talented youths who believe in acting older than their biological ages. The cult has clan elders such as Mass-Betrayor Andrew Mwenda who vociferously claims to be the oldest man around Uganda, although he is just over 40 years. Ikoku adds 5 years each year using a formula he elaborately explained to me.

This ethos of adding more years to one’s age is good in as far as it encourages maturity. These young men act a lot older than their ages. They push themselves to think, invest and produce as much as people in their cult-allocated age-group.

But the disadvantage is that the corrupted age-maths entraps and ensnares gullible old women looking for love. If elongated foreplay in several horizontal positions with a 27-year-old was freaking me out, the realisation that he is only 22 years old makes me shiver with shame and guilt.

What have we done Ikoku? I am old enough to be your mother. My ponani that you lovingly explored with all your probes is old enough to have birthed you twenty-two years ago. My big nipples that you lustfully kissed could have nursed you until you were weaned, Ikoku! My girth that you lovingly mounted and wildly rode is wider and older than your mother’s. Why start up lustful fires in the depths of my elderly alcoves and alleys? Who will put out the hot coals you built up and left inside of me? 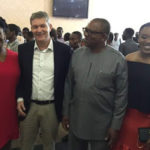 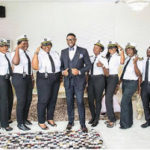