Connect with us
The Federal Government of Nigeria has filed a motion to withdraw the charge of criminal conspiracy against Senate President Bukola Saraki and his Deputy, Ike Ekweremadu. 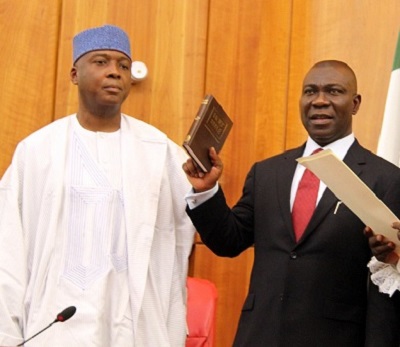 An affidavit in support of the motion was filed before the High Court of Federal Capital Territory on Thursday by a litigation officer from the Federal Ministry of Justice, Odubu Loveme.

Messrs. Saraki and Ekweremadu, as well as a former Clerk of the National Assembly, Salisu Maikasuwa, and a former Deputy clerk, Ben Efeturi, were first arraigned before Justice Yusuf Halilu on June 10, 2016 via charge No. CR/219/16.

They all pleaded not guilty on July 27, 2016. In the motion filed Thursday, Mr. Loveme said counsel to the Federal Government on the matter, Aliyu Umar, a Senior Advocate of Nigeria, on September 30 in the office of the Director of Public Prosecution told him that he had studied the case diary and “had decided to amend the charge in the manner stated on the face of the motion paper”.

Mr. Loveme added that he has, consequently, filed an amended charge.

“That I depose to this affidavit in good faith believing same to be correct to the best of my knowledge and information and in accordance with the Oaths Act Cap 01 laws of the Federation of Nigeria,” he said.

Based on the amended charge, only Messrs. Maikasuwa and Efeturi would face prosecution.

Count 1 of the charge against the two civil servants, is that of Criminal Conspiracy punishable under section 97 (1) Penal Code Act ( Northern States) Federation Provisions Act, 1960, Cap 345, laws of the Federation 1990 as amended.