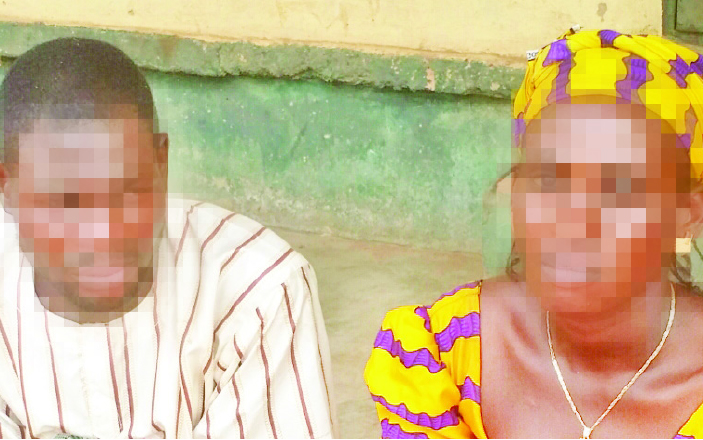 A Nigerian woman, Mary Nyikwase Kyokwagh, had to bury alive her only two-month-old son, Aondona, in an attempt to save her marriage after being displaced with her husband by herdsmen.

According to Sun News, Mary Kyokwagh, an indigene of Kuji village in Keana Local Government Area of Nasarawa State is married to Mr. Kenneth Azo Kyokwagh, from Taraba State.

Azo Kyokwagh who spent years farming and fishing by way of subsistent living met Mary in a market square and hit it off immediately with her. The romantic relationship later led to marriage in February 2014.

After their marriage, the couple spent about four years without having a child that they could call their own, though they loved each other. Unfortunately, the idea of a medical test and solution never came up while the challenge lasted.

It was in the midst of this problem that Mary went to the market to sell fish, leaving her husband at home, sometime in October 2017. While there, Fulani herdsmen attacked the village and killed a lot of people and displacing the entire area including the market place. People ran helter-skelter for their lives. The crisis escalated and lasted till 2018. In the process, the husband and wife lost total contact with each other and had some difficulties reconnecting, despite spirited efforts.

In the meantime, the entire village was razed to the ground by the marauding herdsmen. Mary, believing that her husband had been killed like others were, found her way to Kardoko IDP camp in Nasarawa State. While there, she couldn’t cope with the emotional trauma that thoughts about her husband and the hard and difficult condition in the camp were causing her. In fact, hunger and lack of basic necessities of life were the order of the day in the camp.

It was in this condition that Dominic Akelegu, a Migili man by tribe, offered to assist her when he visited the camp. She obliged and left the camp to cohabit with him in his house, a rented apartment, in Lafia. When Kenneth Kyokwagh too could not trace his wife due to the constant attacks, he equally assumed that she had been killed. Lonely and distressed, he moved to Daudu IDP Camp in Guma Local Government Area of Benue State. While there, he also found out that he could not cope with the situation in the camp and decided along with other able-bodied young men to move to Lokoja, Kogi State, in search of greener pastures.

According to Mary, one thing led to another and, Dominic Akelegu, 40, her supposed magnanimous benefactor, started making love to her the moment she moved in with him. Barely two months later she became pregnant for him. Unfortunately, tragedy struck again as the man who is said to be an Okada rider in Lafia town died in a fatal auto accident when her pregnancy was eight months and two weeks old. Before that time they had spent about 10 months together. But during this period, the idea of finding out Akelegu’s birthplace never crossed Mary’s mind. Neither did it occur to her to ask the man who accommodated and fed her.

In October 2018, she managed through the little savings he left behind for her and some financial assistance from neighbors to be delivered of a baby boy. But thereafter, life became tough for her and the newborn baby, as she could not cope with the difficulties of nursing him without his father. And to make a bad situation worse, she had nowhere to go as her own parents were killed in the attacks on farmers in Keana Local Government.

But as the crisis subsided, Kenneth Kyokwagh, who she originally presumed dead suddenly re-appeared in December 2018 to start rebuilding his destroyed house in order to continue with what was left of his life. Earlier this January, 2019, his wife whom he also assumed dead in the attacks, feeling the ever-increasing heat of frustration that comes with taking care of the newborn baby boy in Lafia, without anybody to help, decided to return to her husband’s house in Tse-angom village near Yarwatter to start a new life with returning natives.

But to her greatest surprise, she met her husband alive and well. In fact, he has put one of the houses in order and was working on others. Naturally, the man was shocked to see his wife with a newborn baby – a baby he never knew anything about, of how she got it. For that, he vowed never to accept her under his roof, no matter what. His opposition to Mary to find somewhere to live with the child as he would, under no circumstance accept their living together really put her under great pressure, distress and confusion from which she did not know what else to do. In an effort to save her marriage since there is no other place to go, the woman decided to bury the boy alive while her husband was away in Lokoja to recover some of the debts being owed him by people he worked for. He returned from the one-week trip to discover to his horror and dismay that his wife had committed what seemed to him a greater atrocity by burying the baby boy alive.

The media correspondent who visited the village, which is about 282 kilometers from Lafia had interactions with both the man and his wife over the devilish act. Shaking his head severally, Kenneth Kyolawagh clapped his hands together, looked into the reporter’s eyes and said:

“This world is really a wicked place. I can’t believe that this is happening to me. You can see that the village is very scanty. I don’t know the whereabouts of other members of this village. Half of them were killed by the herdsmen, without their corpses being recovered. And the manner the attacks came, my wife was not at home and I thought she was affected on her way back; some of us ran for our lives.

“I managed to escape by God’s grace. I completely believed she was killed like many others were. I found my way to Daudu and from there proceeded to Kogi State where most of our people were running to for greener pasture. I didn’t hear from her. My anger is that within a year-plus, it was comfortable for her to re-marry; it means she didn’t have me in mind. I am not ready to listen to her stories and how it happened. I can’t accept her with a baby of somebody whose blood I don’t know. It is not possible.”

Asked if he can really exonerate himself from the crime as his hard, unyielding stance seemed to have pushed his wife into committing the ungodly act, he replied:

“I didn’t ask her to kill or bury the boy alive. I simply told her it will not be possible for us to stay together again with a baby not from me. I have suffered much in my life, especially in Kogi State which is why I returned despite the risk. I went back to recover my money from some people whom I worked for, only for me to come back and discover that she had done away with the boy to remain with me. I am speechless.”

With tears streaming down her cheeks, his wife said:

“I thought he had died in the attacks. I didn’t know he is alive. I was frustrated and the man offered to help me out and suddenly started sleeping with me. He died eventually and my condition worsened at the time I thought I had gotten a safe landing. I had serious issues giving birth while I was with Mr. Kyokwagh. I didn’t know I would meet him here again because I concluded he had died. I didn’t hear from him and nobody seemed to know much about his whereabouts. Many villagers here died without their corpses recovered and I thought he was among them. Little did I know that he survived the attacks. He was not even ready to hear my explanation. Since he doesn’t like seeing the newborn boy, I decided to bury him alive so that he can accept me back. Since a few weeks that I returned here, he doesn’t care about me and the baby simply because he is not the biological father. I decided to end his life in order to stay here. The biological father is late and I don’t know how to trace his birthplace.”

Asked if she regrets her action, she said that she would only do so if her husband fails to forgive her and accept her back. But what if, despite doing away with her baby, the man still insists she should find her way, what would she do?

“I have nowhere to go,” she said with an emotion-laden voice. “My parents were wiped away in the herdsmen attacks. The father of the boy who should have been alive to take care of me is gone. So this is my challenge.”

New CJN, Mohammed Tanko Has 32 Children, How Does He Feed And Care For Them On Judge’s Salary? – Omokri